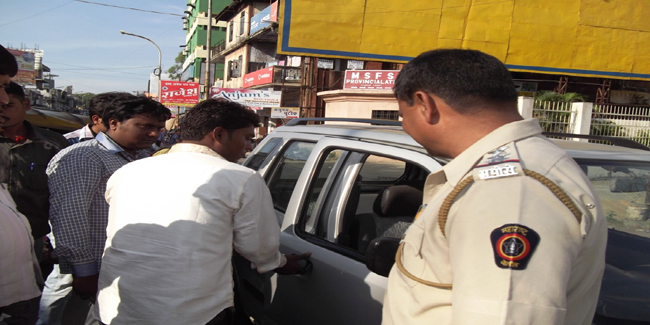 File Photo : Similar accident of theft of Rs. 8 lakh from a Car in Sadar

Nagpur News: The burglaries in cars have suddenly increased as a trickster relieved a woman of jewelleries worth Rs 38,000. The amount may look a small one but the gravity of the situation is enough to sound alarming bells and avert such crimes.

According to police, the woman Shahnaz Iliyas Noorani (35), resident of Sidco Colony, Butibori, along with her daughter Alfiya went to Sadar for shopping in a car (MH-19/AE 4922). The car was stationed near Shri Ram Tower parking at about 3.30 pm. Shahnaz kept her purse, containing gold ornaments, in the car. The driver was seating in car and Shahnaz and her daughter went to for shopping in the Wave Shop. At the same time a 30-year old person approached the car and told the driver that some cash is lying near the car door. The driver, thinking that the money might be of Shahnaz, came out of the car. He spotted some money lying near the door. As soon as he tried to lift the money, the trickster grabbed the person and vanished from the spot. The theft was noticed when Shahmaz and her daughter returned to the cars. Shahnaz found the purse missing.

Shahnaz then approached Sadar police and lodged a complaint against the unidentified burglar. The Sadar PSI Dere booked the burglar under relevant Sections of IPC and is probing the matter further.