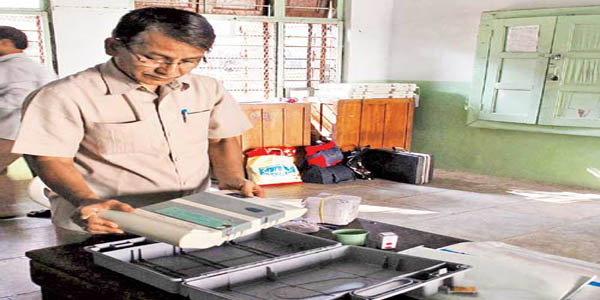 Nagpur News: Come election and the teachers are the most worried lot owing to the additional workload they sustain apart from discharging their normal duties, but not anymore. Soon the teachers would be relaxing in respite as the district administration has decided to ease off their burden during the upcoming parliamentary and assembly elections. From the next poll season, employees from banks and Life Insurance Companies would also be roped in for election duty. The election commission is busy readying human resource database to add more work heads in its poll activities.

Similarly, restructuring work for poll booths and voters list has also picked up. District administration has declared a fresh list of polling booths upon the directives from election commission. As per the new list, a total of 434 new polling booths would be established in Nagpur and Ramtek parliamentary constituencies. The numbers of officers and employees to be deputed at each polling booth have also been increased to 5 from its earlier strength of 4. An estimate puts the net requirement of 8,000 employees and officials each for Nagpur and Ramtek Lok Sabha areas. This takes the total requirement of about 16,000 work heads in both the Lok Sabha constituencies.

A list to this effect comprising class-I officers to class-IV employees functioning in the concerned departments of central and state governments, semi government and autonomous institutions is also being prepared. Initially employees and officials from banks and LIC have been included in the work force. Human resources from more departments would be invited if the need arises, informed official sources.

Bank employees served as micro observers during the last elections. Often the election dates confronted with that of examination time which dealt stress to the teachers who had to cope up with both the responsibilities simultaneously. Given this problem, more departments have been called into service this time. Additional human resources from the district are also likely to be dispatched to connecting electoral constituencies, in case the need occurs.

In Nagpur, there will be a total of 2005 polling booths including 271 new stations whereas in Ramtek it will be 2237 polling booths that includes 163 new ones. List of sensitive polling booths would be declared before election.