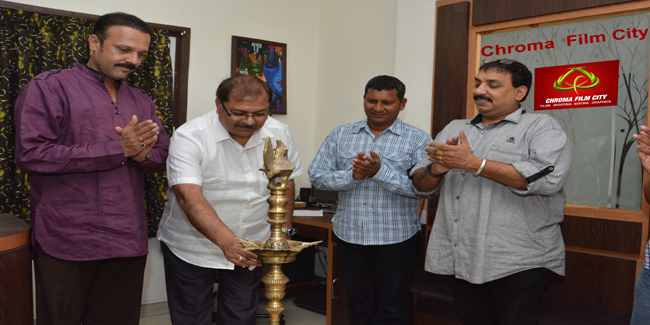 At a press meet held on the day of the inauguration, Nagpur’s personalities from the field of entertainment and media along with press scribes and photojournalists were taken around the facility by Rajesh Puppala, company’s Creative Director and first generation entrepreneur of the city.

Puppala informed that this is a first of its kind venture in Nagpur. It has one of its kind 30’x11’ Green Screen for Chroma Key, multiple background options for photography and videography, editing and mixing, professional graphic designing, most advanced animation software , movie and TV serial making, Marriage filming, Modelling and Ad making assignments, all types of music album and audio recording facilities.Puppala said song sequence shooting done here on newlyweds has been highly appreciated and demand for it is pouring in from all over central India. Looking at the demand from general public to make their important days memorable and to create a pool of trained professional in this field, Chroma Film City Institute will conduct Short-Term courses and workshops on Photography, Videography and Post-Production.

Rajesh Badal appreciated the concept of a complete all under one roof studio complex in Nagpur and latest state of the art equipments. Manish Awasthi, who was also present at the press conference, pointed out that corporates, government agencies, NGO’s and general public can now get high quality promotional films , Ads, talent videos, music audio- videos made in Nagpur itself and hoped that the facility will create interest among the filmmakers and general public and give a boost to this industry here.