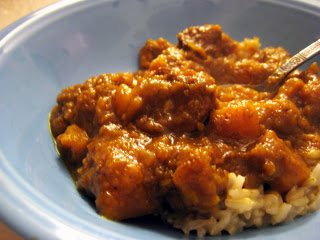 This dish is very comforting and satisfying to make, as well as to eat. It involves little effort from you because your hob takes the strain. This allows you to relax with a glass of wine (or should I say a spritzer to save you some calories) while a fabulous dish is being created…

How to cook it…

1. Brown the lamb in batches in a large, deep non-stick frying pan over a high heat with a tablespoon of the oil.

2. Add a bit of water to the saucepan to deglaze the pan between frying each batch (this little liquid adds even more flavour to the final dish). Set aside.

3. Add the remaining oil to the pan and fry the onion over a medium heat for five minutes until slightly golden, stirring occasionally.

4. Add the garlic, cinnamon, cumin seeds, ginger and saffron and stir over the heat for 30 seconds to release the aromas of the spices.

5. Add the meat back into the onion with the chickpeas, stock and tomatoes. Bring to the boil, then turn down to a gentle simmer. Cover and cook for one hour.

6. Meanwhile, put the couscous into a large bowl.

7. Add the sunflower seeds and a third of the herbs and cover with 200ml cold water. Set aside for the water to be absorbed.

8. After one hour, add the butternut squash and the remaining herbs, apart from about a tablespoon, to the tagine and cook for a further 15 minutes, uncovered

9. After the 15 minutes has passed, season the tagine well.

10. Fork through the couscous to separate the grains and spread evenly over the top of the tagine. Cover and simmer for a further 15 minutes.

11. Serve immediately, ensuring there’s some lamb and couscous in each spoonful and also a sprinkling of the remaining herbs.

Tip: Instead of butternut squash, you could add 100g dried apricots or prunes.