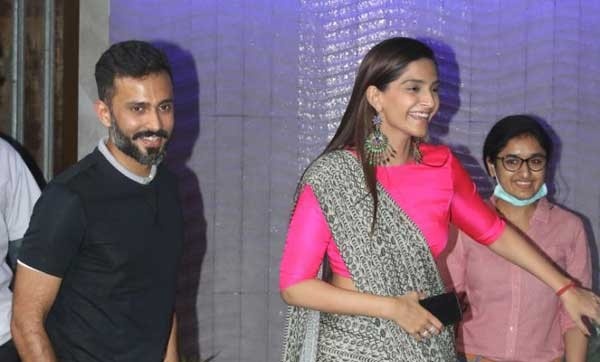 New delhi: The soon-to-be married couple Sonam Kapoor and Anand Ahuja’s honeymoon would get delayed for some months because of the actress’ jam-packed work schedule. Mumbai Mirror reports that Sonam and Anand, who will get married on May 8, have planned to go for honeymoon by October-November. “Anand won’t be at Cannes with her but the couple is planning an October-November honeymoon which will be delayed because of the bride-to-be’s choc-o-block schedule,” a source told Mumbai Mirror. Soon after the wedding, Sonam Kapoor will walk the Cannes red carpet (May 14-15). Later, she will begin her shooting schedule and will also get busy with Veere Di Wedding promotions. Sonam has Ek Ladki Ko Dekha Toh Aisa Laga and The Zoya Factor in the pipeline.

Sonam Kapoor and Anand Ahuja’s wedding festivities begin from Monday. There are sangeet, mehendi ceremonies lined-up for tomorrow while on Tuesday (May 8), the wedding will be followed by a grand reception.

After the wedding, Sonam and Anand will shuttle between Mumbai, Delhi (his hometown) and London. “Anand owns homes in Delhi and London, and Mumbai is Sonam’s base,” the source told Media.

Back at Anil Kapoor’s home, preparations for sangeet are in full swing. Each day, the Kapoors are hosting several guests. Apart from the family members, Varun Dhawan, Jacqueline Fernandez and Karan Johar are expected to perform at the sangeet. Arjun Kapoor, Shanaya, Anshula and others are reportedly dancing to Sonam’s hit tracks such as Abhi to Party Shuru Hui Hai and songs from Veere Di Wedding.