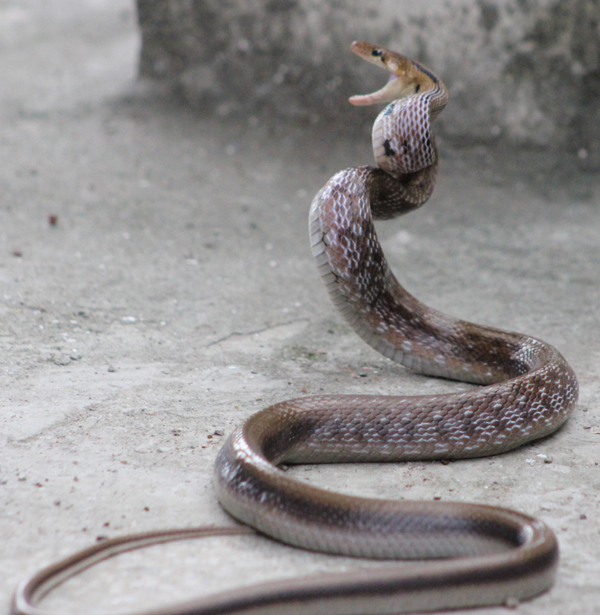 Nagpur News: With excessive rains lashing Nagpur this season, the instances of snakes crawling into city’s residential areas have become a regular feature. However, most of the sarpmitras in the city are of the view that forest department hardly paying any heed towards the conservation of these crawling species. They believe the department is only focusing on the conservation of tigers whereas, reptiles like python are on the verge of extinction in the region. Conservation of snakes should also be taken up by the forest officials.

City sarpmitras have caught hold of around 200 water snakes till this time during the ongoing season. Of these 30% of the serpents were poisonous. Large number of these snakes were spotted and caught from various nullahs of the city and green patches like Vayu Sena Nagar, Ambazari  and VNIT campus area.

Talking to Nagpur Today, sarpmitra Shrikant Ukey informed, “Every month an average of 150 snakes are caught in the city and then released in the nearby forests. 30 percent of these snakes are poisonous. There should be a reserve forest area for the release of these snakes.”

Sarpmitra Nikhil khungar talked about the difficulties being faced by the sarpmitras. He revealed,  “There are about 150 sarpmitras in Nagpur. Of them, 20-30 are active on daily basis. We receive at least 8 to 10 calls per day. These snakes that we catch are released in the jungles of Hingna and Gorewada with the assistance of forest officials. Sometimes, we catch snakes during night time and it cannot be released it when it’s dark, given the security concerns. Keeping snakes with us and not releasing is also against the rule.” He added that there should be snake parks in the city for keeping the snakes before releasing it in the wild. He said that the sarpmitra have been demanding for authorized identity cards and Insurance cover for them, given the risks involved in their job. He hoped that the same would be looked into by the wildlife conservation authorities.

The sarpmitras of Nagpur from past many years are working hard to spread the awareness about conservation of snakes.The citizens can call them any time to catch snakes if they find it in public places. The phone numbers of the sarpmitras are with police control room, NMC, forest department and fire department. Even cellular companies and radio stations have their number, wherein the people can call these sarpmitras for catching the snakes.

Come Sunday and Nag Panchami will be celebrated throughout India. In Maharashtra on this occasion we see snake charmers visiting the houses with black cobra seeking alms. Snake charmers bring snakes and cobras to public places for the people to worship.

The Forest department has been acting tough against the snake charmers for the past few years.  According to the provisions of the wildlife Protection Act, 1972, keeping snakes, exhibition of live snakes, offering milk to snakes and worshipping live snakes have been banned.

Sarpmitra Deepti Maskhare whose husband is also a sarpmitra  claimed that there were hardly any snake charmers seen in Nagpur for the past five years. Sustained drives by sarpmitras have made citizens aware of importance of snake conservation. And they have distanced away from the tradition of feeding milk to snakes and other cultures associated with it. As a result the tradition is fast vanishing .The forest department have become very vigilant and snake charmers are not allowed to perform with the snakes.