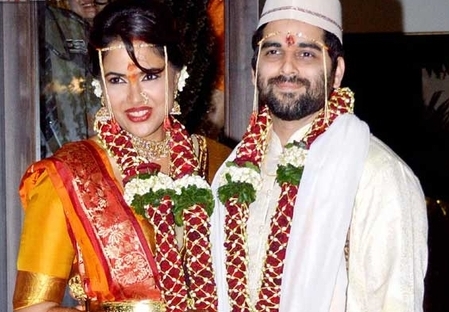 It’s wedding bells ringing in Bollywood these days. After John Abraham broke the news of his marriage with his investment banker girlfriend Priya Runchal through tweeting the message ending with John and Priya Abraham, it was Sameera Reddy’s turn to tie the knot. However Sameera made no suspense about her marriage and came out in the open with her nuptial knot with her fiancé Akshai Varde. Sameera’s marriage was duly planned too.

Sources informed that the two got engaged last year December in a private ceremony at Sameera’s residence. The couple had planned to tie the nuptials in April, however Akshay preponed it to January due to his business commitments.

The wedding ceremony took place in a traditional Maharashtrian style, however it was a low-key affair. Sameera wore a Neeta Lulla bridal collection. She was spotted in typical Maharashtrian bridal attire. Sameera looked beautiful in an all brocade golden and red sari. Celebs like Neeta Lulla’s daughter Nishika Lulla, Vijay Mallya and others were present at the ceremony.