Nagpur News :  RSS chief Mohan Bhagwat today refused to comment on corruption allegations against BJP president Nitin Gadkari, saying it was a “matter of the party”.

Asked about the charges against the BJP chief, Bhagwat said, “It is a matter of the party. 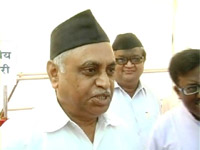 “I have already touched the issue of corruption (in general) in my speech and if you want to know more, you can speak to Manmohan Vaidya, the Prachar Pramukh of the organisation,” he told reporters after addressing RSS workers at the annual Vijayadashmi function here.
Vaidya said the allegations of corruption against Gadkari “are in the media only”. “A media trial is on and the concerned person (Gadkari) will put forth his views before the party,” he said.

Gadkari, who attended the function, in the RSS attire, left the venue without talking to media.

Media reports have raised questions over the source of funds for Purti Power and Sugar Ltd controlled by Gadkari. Media investigations claim that major investments and large loans to Purti were made by a construction firm Ideal Road Builders (IRB) group, which had won contracts between 1995 and 1999, when Gadkari was PWD minister in Maharashtra.

Gadkari has denied the allegations and offered himself and his companies to any probe.

Earlier, during his speech, Bhagwat said Sangh “continues to concentrate in its work of character building and people should be made aware of the need to change the system, ensuring that they do not develop an aversion towards it.”

“The mind-boggling revelations of corruption have not come to an end yet. Many small and big agitations are being conducted to demand punishment to the corrupt, to bring back black money stashed away in foreign banks and for making stringent laws to curb corruption,” he said.

On the “seven social sins” quoted by Mahatma Gandhi in the “Young India” issue in 1922, Bhagwat said, “We cannot become free of fault by leaving all responsibility to politics, government and the administration.”

These sins are politics without principles, wealth without work, pleasure without conscience, knowledge without character, commerce without morality, science without humanity and worship without sacrifice, he said.

Opposing construction of any structure for the minority community at the disputed site in Ayodhya, RSS today asked the Centre to bring in a legislation at the earliest allowing Ram Janmabhoomi Trust to construct a Ram temple there.

RSS chief Mohan Bhagwat said any construction for the sake of the minority community should be allowed only outside the “cultural boundaries of Ayodhya”.

Quoting reports, Bhagwat said, “Attempts are on to acquire a large plot of land adjacent to the Ram Janambhoomi to construct a big structure for Muslims.”
“The state government will acquire the piece of land and the union government will be funding the construction,” he said.
“The construction of Ram Janmabhoomi temple is an issue pending before the court. Therefore, making such irresponsible proposal at this juncture will amount to playing with the sentiments of the crores of Hindus and will result in vitiating the atmosphere of amity,” Bhagwat said.

Considering the judgement delivered by the Allahabad High Court on Sept 30, 2010, the Parliament should enact a legislation, he said adding, “This is the only way to solve the issue amicably.”