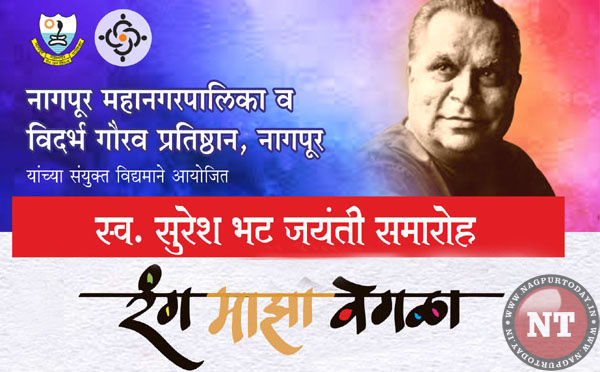 Nagpur: The Nagpur Municipal Corporation and Vidarbha Gaurav Pratishthan are jointly organising a musical – ‘Rang Majha Vegala’ — a programme of songs and ghazals to pay tributes to Kavi Suresh Bhat on his birth anniversary on April 15.

The musical event is being organised at Kavi Suresh Bhat Auditorium, Reshimbagh Ground, at 7 pm on Sunday, April 15.

The programme will be held in the august presence of Mayor Nanda Jichkar and MLA Krishna Khopde as chief guests. Vidarbha Gaurav Pratishthan’s President Datta Meghe, former MP, will preside over. Chairman of NMC’s Sports and Culture Committee Nagesh Sahare will be chief guest.

The presenter of this musical programme is Sachin Dhomne of Sur Sangam troupe while the artistes are Surabha Dhomne, Monika Deshmukh, Mukul Pande, Shashi Vaidya and other artistes. The event will be conducted by Prakash Edlabadkar.