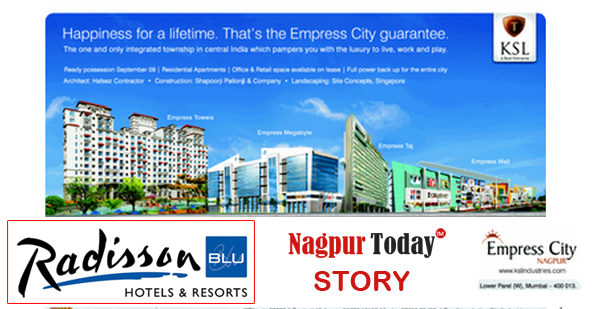 Nagpur News: The deeper you go, the murkier it gets. Nagpur Municipal Corporation’s ill functioning has thrown open a can of worms exposing the nexus between the civic tax evaders and its highly placed officials. Radisson Blu – the 5-star hotel on upscale Wardha Road in Nagpur which has been mired into controversy right since its inception – has stuck another controversy. The hotel was found to be sharing special warmth with NMC as the latter put the commercial entity into residential one. After Nagpur Today reported over the issue, NMC rushed to cover up the mess.

NMC Commissioner Shyam Wardhane told Nagpur Today, “The property tax on Radisson Blu was briefed on the open land it used to be before the existence of the hotel.” He said, “It’s not that we are sparing Hotel Radisson Blu from paying tax. Tax assessment for Radisson Blu has now done by an official named Hastak. Now that he has completed the assessment on commercial basis, soon the recovery would be initiated.”

However Wardhane failed to explain how the earlier assessment was done for open plot (show as residential) despite the fact the Besteck Hospitality Pvt. Ltd. which operates the hotel, has brought up the hotel for the period as long as two years.

Accepting the delay in the assessment, Standing Committee Chief Avinash Thakre told Nagpur Today that he was informed that tax on Radisson Blu was calculated on the basis of its previous status which was an open land and now it is being assessed under commercial head. When asked on the whopping amount of water taxes pending on various top rung business establishments and high profile individuals, Thakre said that now we have brought in e-governance with an aim to check repeated defaults on these taxes, we are sure to put everything in place soon. About KSL sitting on the unpaid water tax of more than Rs 5 crore, he said that he would have to check the documents for coming up with reply.

Ironically NMC Chief Wardhane too does not have any idea about the heaping unrecovered water taxes that run in crores of rupees. “I do not have any idea. I will have to look into it”, he told Nagpur Today when asked about the water tax outstanding of more than 5 crores on KSL and Industries Ltd, Empress Mills, Maharashtra Textiles.

The information received by Corporator Sandeep Prahlad Sahare through Right to Information clearly shows that the KSL, placed at no. 19 in the water tax defaulters’ list, has been shown as evading Rs 5,57,94,997.

Like NMC Chief, many of his subordinates have consciously chosen to sit on the complaints that they received in regard to the large number of tax defaulters. Couple of NGOs have also filed RTI query which was responded to the surprise of the citizens. As the list came in the citizens watched in shock and dismay, left to nothing but lament the sheer negligence on the part of NMC at the cost of city’s development.