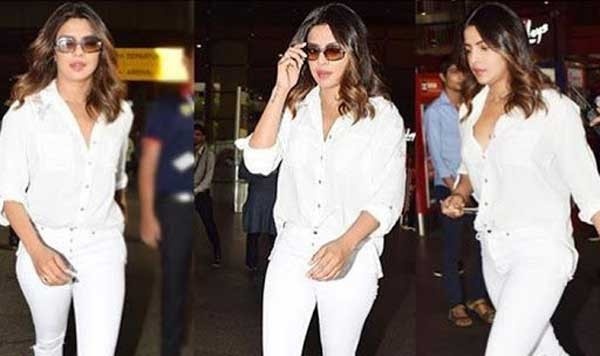 Look who’s back in town! Our Bollywood babe and Hollywood’s sweetheart Priyanka Chopra is back in Mumbai from US! The girl is in town to begin shooting for her upcoming film ‘Bharat’ with Salman Khan. Earlier today, PeeCee was spotted at the airport and she was all smiles for the shutterbugs as she exited the airport. The actress looked stunning in her airport look.

What we found strange is that this time, PeeCee was seen without her boyfriend and American singer-songwriter Nick Jonas. We wonder why? Speaking of Priyanka’s airport fashion, the actress was dressed in an all-white ensemble. She wore a white shirt and ripped jeans with a pair of pointed pumps. Her attire was accessorised with a matching Fendi handbag and sunglasses. The actress completed her look with nude make-up and wavy hairdo. I must say, Priyanka managed to carry the look effortlessly, looking gorgeous like all the time.

On the professional front, Priyanka, who has been juggling with multiple Hollywood projects and community work, has signed a Bollywood film ‘Bharat, opposite Salman Khan. Reportedly, the actress will begin shooting for the Ali Abbas Zafar’s film from July onwards. Apart from shooting for the third season of ‘Quantico’, the actress is awaiting the release of her Hollywood films, ‘A Kid Like Jake’ and ‘Isn’t It Romantic’. Reportedly, PeeCee is also in talks with Shonali Bose for another Bollywood project.