The police first towed the Skoda car, which was involved in an accident at Shankar Nagar Square, to Ambajhari Police Station. In the meanwhile, the car driver Shailesh Hiranwar and his friends disappeared from the scene. But the disgraceful attitude of Ambajhari police in general, and the PSI Sanap in particular, was exposed when they booked the car driver as “unidentified”, albeit, fully knowing the name  of the accused as Shailesh Hiranwar. 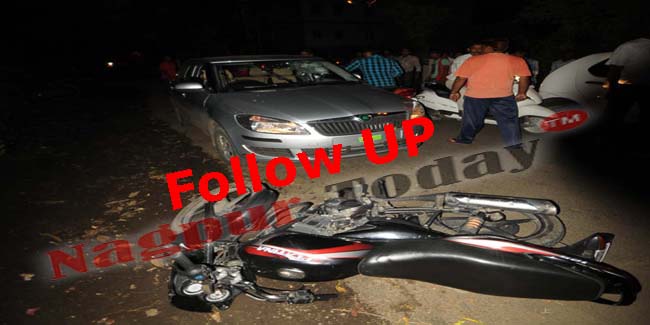 Nagpur News: The seriousness of the road accident involving a Skoda car and a motorcycle at Shankar Nagar Square vanished into the thin airs as the following developments, now, involving the police and the accused car driver, are to be scanned in details. The developments could be defined in gravest words and in unhealthy nature.

According to sources, immediately after the serious road accident, the outraged onlookers had resorted to damaging the Skoda car severely. However, the car driver  Shailesh Hiranwar, who was reportedly under the influence of liquor, called his friends and 12 to 15 family members. And they reached the spot with weapons and sticks and they together started hitting the car damagers and other innocent bystanders in a ferocious manner. They even inflicted severe injuries on some of the witnesses and the crowd that had gathered at the spot after the accident.

However, the innocent onlookers were yet to get a shock of their life time when Ambajhari police reached the spot. The police, already apprised of the identity of the car driver, instead of “pacifying” Shailesh Hiranwar and his friends, menacingly rushed towards the innocent onlookers and pushed them forcibly with wielding lathis. “And this way they brought the situation under control.”

The real drama was yet to be staged by the police. The police first towed the Skoda car of Shailesh to Ambajhari Police Station. In the meanwhile, Shailesh Hiranwar and his friends disappeared from the scene. But the disgraceful attitude of Ambajhari police in general, and the PSI Sanap in particular, was exposed when they booked the car driver as “unidentified” ,  albeit, fully knowing the name of of the accused as Shailesh Hiranwar, under Sections 279, 337, 427, and 184 of IPC and Motor Vehicles Act. The police, the PSI Sanap said, have launched a “hunt” for the “absconding” car driver.

According to sources, the Hiranwar family and their counterparts in large number come under the class having powerful muscles and money power. The “class” was enough for the Ambajhari  police to bow up to their knees in front of the “muscle and money power.” This act of buckling under several pressures has been reflected in their appalling actions of not booking Shailesh as accused car driver and, instead booking the “unidentified” car driver in the serious accident. The motorcycle rider, identified as Govind Rambhau Baitule (30) was coming from Satranjipura when the mishap occurred at Shankar Nagar.

The shabby actions by Ambajhari police clearly suggest they are trying to save  the “powerful” accused Shailesh Hiranwar although PSI Sanap, while talking to media, said police are making all efforts to arrest the accused at any cost. (Could there be an example the police telling otherwise). The PSI Sanap’s words are oft repeated words of police trying to arrest accused. But the truth is totally contradictory. The police have started to feel the heat of political and money power pressures. And it would be no surprise if the car driver Shailesh is found roaming on the city streets freely and without fear. The Hiranwar families are an influential lot.