The Intelligence Agencies, Nagpur Police and other security forces have gone on alert mode to foil any attempt on the part of extremist elements to disturb the main Republic Day (R-Day) function in particular and the patriotic atmosphere in the Orange City in general.

The city police, Anti-Terrorist Squad (ATS), other security forces have thrown security blanket across the city and have deployed policemen in large numbers at Kasturchand Park where the main R-Day function will be held. The Sniffer Dog Squad would help security forces in scanning every suspicious baggage and even human bombs. Similarly, policemen have dotted every corner of the city for maintaining law and order on the R-Day.

The city police are not taking any risk as the Nagpur City had been and has been the target of terror outfits and Naxals according to the reports of Intelligence Agencies. Two terrorists were shot dead near RSS Headquarters in Mahal before they could succeed in their diabolical plan to sneak into the sensitive building and create havoc few years ago. The banned SIMI activists had carried out a pipe bomb blast near Badkas Chowk in Mahal triggering panic and fear among citizens. Similarly, arrest of Naxalites and their sympathizers in the past have forced the police go on high alert.

The security forces are keeping a hawk eye on the activities at Airport, Railway Stations, Bus Stand, Malls, Multiplexes, main markets, and other sensitive areas. The city and district police have been patrolling National Highways and erected check posts. The suspicious vehicles and travelers have thoroughly been frisked. Police have also checking wine bars, lodges, hotels for any suspicious elements. The cinema theaters and markets are being thronged by the people as thousands of them are enjoying fourth Saturday and the picture will be same on Sunday, the R-Day. Hundreds of people have planned picnics at Pench, Chikhaldara, Ramtek, Khindsi, Pachmarhi, and other tourist places. The police, ATS, QRT and other security forces have been directed to remain alert in order to foil bloody incidents by extremist elements.

The main function of Republic Day has been organized at the historic Kasturchand Park and, along with VIP leaders, top Government officials, the common citizens will attend the function in large numbers. The Naxalites take advantage of such situations and penetrate the crowd with their nefarious designs and carry out bloody incidents. The security forces have called police watchers from the Naxal-infested Gadchiroli to mingle with the crowd and keep a sharp eye on any Naxalite. The Sniffer Dog Squad has already scanning the entire Kasturchand Park for any explosives hidden at vantage points. 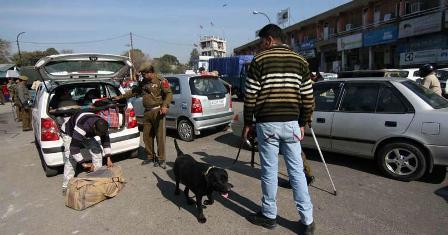