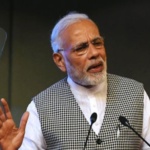 Mumbai: With development topping his agenda, a series of engagements have been lined up for Prime Minister Narendra Modi during his visit to Maharashtra on Tuesday, an official said here on Monday.

The highlights will be laying the foundation stone for two metro corridors in Thane district and launching of a housing project for the economically weaker sections and the low income group under the Pradhan Mantri Awas Yojana (PMAY).

In Kalyan, Modi will attend a function related to the Thane-Bhiwandi-Kalyan Metro 5 and the Dahisar-Mira-Bhayander Metro 9 corridors that would ease the transportation problems in these bustling towns in the Mumbai Metropolitan Region (MMR) adjacent to the island-city.

He will also launch a housing scheme involving 90,000 homes for the poorer sections of society at the venue, constructed under the PMAY here by the City and Industrial Development Corporation Ltd. (CIDCO).

Thereafter, he will fly down to Pune and lay the foundation stone for the Pune Metro Rail Phase 3 and address a public meeting.

Interestingly, the ruling NDA ally Shiv Sena has been kept out of the crucial events in Thane amid the ongoing war of words between the two parties.

Earlier in the morning, Modi will attend and address the Republic Summit organised by Republic TV, a private news channel.

Thereafter, he will go to Raj Bhavan and release a book titled ‘Timeless Laxman’ based on the life and little known facets of the legendary cartoonist, the late R K Laxman.

The book has been penned by his daughter-in-law, Usha Srinivas Laxman.

Laxman, famed for his creation, The Common Man, through whose eyes he chronicled Indian history and regaled millions daily in ‘The Times Of India’ and other publications for nearly seven decades, passed away in January 2015 in Pune.

Modi, who will reach Mumbai Tuesday morning around 8 am shall be received by Maharashtra Governor C. V. Rao and Chief Minister Devendra Fadnavis besides other dignitaries and will depart for New Delhi from Pune the same evening.