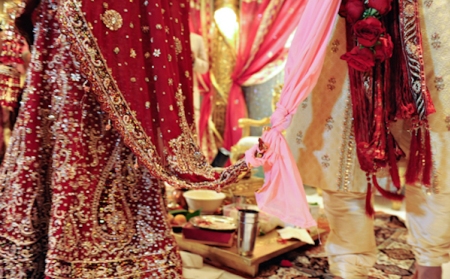 It is a tell tale of a boy and girl who, it appears, were inspired by Romeo-Juliet, Laila-Majnu or likes of several lovers. Roshan Mahadeo Mhaske (21), a resident of Avadhi Gaon in Kamptee Tehsil and Alka Dadarao Dhok, a resident of Aajni (Radke) who were passionately in love with each other had to seek help of Kamptee Police for their marriage as both belonged to different communities and their respective relatives were opposing and putting hurdles of a kind in their proposed marriage.

However, their attitude of never say never again and enormous daring to face thousands of hurdles, could not defeat their resolve to tie nuptial knot and make a cheerful and happy living together. They were ready to enjoy as well as face all odds during their livelihood till death does them apart. With this die-hard attitude, they approached the Kamptee Police Station and sought their help in solemnizing the “Pavitra Bandhan” (Holy Bond). The stone-faced policemen, who are known for showing no mercy to criminals and sometimes innocents either, readily agreed to help them in their pious intention after listening their tale of trouble (opposition from kith and kin).

However, Assistant Police Inspector Vijay Bavane of Kamptee Police Station first invited all relatives of both Roshan and Alka to police station and apprised them of firm resolve of Roshan and Alka to marry each other. Bavane also requested the relatives to yield to the marriage of both boy and the girl. After “yes”, “no” commitments the relatives finally agreed to perform marriage of Roshan and Alka with Hindu tradition in police station itself. The Sub-Divisional Officer (SDO) of Kamptee Tehsil Santosh Wankhede and Kamptee Police Inspector Sahebrao Jadhav were informed about the plan to perform the marriage and after their permission the holy function took place.The two officers also assured Roshan and Alka of the benefits of various schemes the Government offers for inter-caste marriages.

The following lines aptly sum up the marriage in the invincible walls made from solid stones of the Kamptee Police Station.