Nagpur News: Giving a message to society about financial awareness a Katol-based couple have made a PAN card in the name of their 20-day old daughter Nidhi.

A PAN card is made compulsory for all economic transactions. It has become a proof of existence these days and it can be obtained by all Indian citizens. A person below the age of 18 years can also obtain PAN card. Such pan card does not consist of photo of the obtainer but minor is written instead of it.

Nidhi’s father Manoj Tekade has claimed that Nidhi is the youngest PANcard holder in Maharashtra. Nidhi’s cousin sister Veda was also issued PAN card at the age of 30-days. The number of Nidhi’s PAN card is ‘ATXPT6759K’. 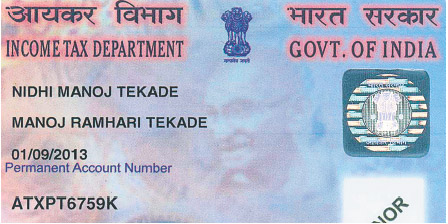 As published in Lokmat Times