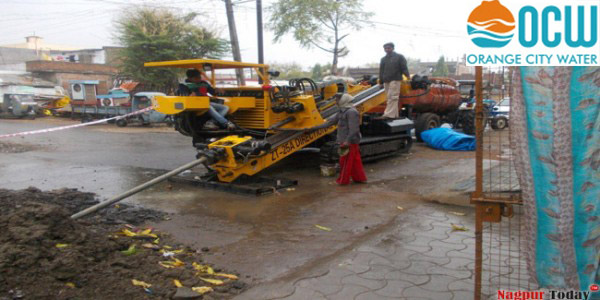 Nagpur News: The negligence of Orange City Water (OCW) Nagpur during pipeline laying work under the 24×7 water supply scheme, once again came to the fore, Sunday afternoon, after a major disaster, which could have cost a woman labourer her life, was averted.

The labourer accidentally hit a live electricity cable triggering off a massive explosion at the Residency road area of Sadar. According to sources at about 1.30 pm the entire area was shaken up by a loud blast.

Eyewitness said that a woman labourer who was digging the road had triggered the blast when she hit the ground with a pickaxe. Other labourers when tried to enquire about the cause of the blast, they found a thick electricity cable passing through.

The cable according to sources was completely destroyed. According to eye witnesses had the woman labourer been using an iron road to dig rather than a pickaxe which has a wooden handle, she could have suffered serious and even fatal injuries. A large crowd of shopkeepers and passersby gathered. According to sources, the lack of coordination between the Maharashtra State Electricity Distribution Company and OCW is also a major reason behind the mishap.

OCW under fire for negligence