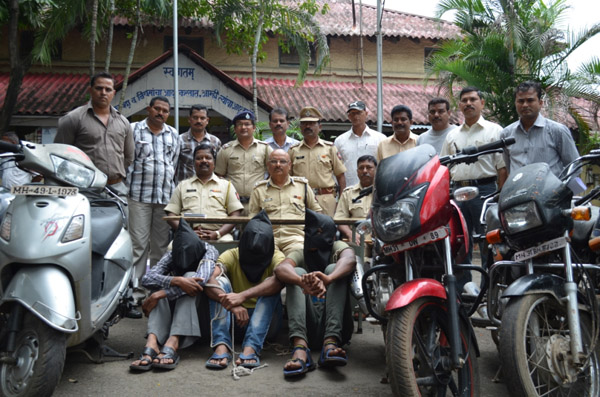 Panchpaoli police have busted a two-wheeler vehicle-lifters’ gang and recovered 13 two-wheelers of various companies in Nagpur on Monday. Acting on a tip off, the police laid a siege around the houses of Suraj Vishwakarma, resident of Dhammadeep Nagar, Nagpur and Santosh Dhakate of Vaishnodevi Nagar. Both of them had reportedly stolen a two-wheeler motorcycle. The police arrested them on August 16. During interrogation, the accused revealed that they had been operating a racket. Treading the leads gathered from the two, the police then reached out to recover the stolen two wheelers in Nagpur and other connecting districts including one in Madhya Pradesh.

Both the gang members informed Pachpaoli Police that they lifted the two-wheelers from Sadar, Shanti Nagar, Kamptee, Tehsil, Yashodhara Nagar, Vathoda, Sitabuldi and other areas. Both Suraj and Santosh also revealed the names of their other gang members as Rohit Ashok Khobragade (25), resident of Plot No 250, Vinoba Bhave Nagar, Lane No 4, under Yashodhara police station. Rohit was also arrested by the Pachpaoli police for lifting of two-wheelers.

The stolen vehicles were recovered from city and rural areas of Nagpur along with nearby districts of Bhandara, Gondia and from some places of Madhya Pradesh. The police have informed that the stolen vehicles would be returned once its owners are identified.

Here is the list of recovered two wheelers. Check if one of those could be yours.