Nagpur News: A private travel bus collided with a truck carrying metal bars early Saturday severely injuring 15 of th total 30 passengers on Amravati Road, near Kondhali. The impact was very severe that it evoke immediate fire in both the vehicles. Though police have not confirmed but sources said that the bus conductor who suffered maximum burn injuries succumbed during treatment.

According to information, a private bus Royal Travels (MH-40-3334) heading towards Nagpur from Akola collided with a truck on Amravati Road, 3km away from Kondhali on earlySaturday morning at around 6 am. Kodhali police informed that the bus and truck were damaged extensively. Both the vehicles turned to ashes as fire broke after the freak accident.

The residents of nearby area rushed to help the passenger and pulled them out before the bus could catch fire, thus, assuring safety of the passengers. Police rushed to the spot after being informed. The injured, aboard the bus, were taken to Government Medical College and Hospital for treatment. Injured have been identified as Ramgopal, bus driver Anjay Kature, RPI leader Rajendra Jawade, Shailesh Tembhre, Ranjeet Naik, Kamal Bhat, Vivek Joshi, Kirti Sonwane, Govind Sonwane, Narendra Mishra, Rajesh Shahu, Yuvraj Bhatewar, Prakash Ahire, Tauseeb Khan, Ashok Inkle, and others.

Prima facie, police said that due to extensive fog in the morning, the truck driver was unable to see the diversion on the road and was turning into wrong side when the speeding bus collided with it. Due to the ear-splitting sound of the accident, nearby residents gathered on the spot and broke the glasses to help the passengers come out. Onlookers said, timely help from nearby residents averted the number of casualties from the accidents. 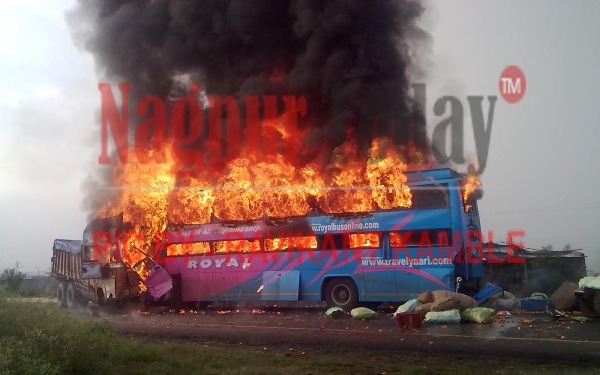 Unfortunately, the bus conductor Rameshwar Munde, a native of Patur, Buldhana sustained maximum burn injuries and reportedly succumbed during treatment in GMCH. However, police have yet not confirmed his death.

Director of Royal Travels said that he rushed to GMCH on being informed about the accident.

It is to be noted that PRI leader Rajendra Jawade and his partymen, who were coming to Nagpur to attend Dhammachakra Pravartan Din programme, also were injured in the accident.

Police informed that after the bus-truck collision, a mini truck loaded with vegetable also collided with the bus due to sudden application of brakes. Mini truck driver, conductor and vegetable vendors were also injured in the accident who were sent to GMCH for treatment.

The onlookers alleged that fire tenders reached the accident spot after 8.30 am even though the accident took place early Saturday morning at around 6 am. “Both the vehicles were ablaze for nearly two hours and no fire tender reached the spot before 8.30 am,” alleged an onlooker. Nearby villagers tried to extinguish the fire but were unsuccessful.

The passenger alleged that some villagers who came to help them also robbed them off their valuables on the pretext of helping them. However, police have not charged anyone for thefts.