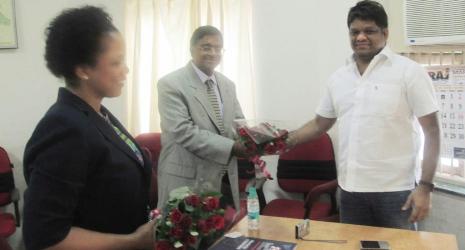 Dipen Agrawal, President NVCC welcomed and felicitated the guests and appraised various activities undertaken by the Chamber since last 7 decades in the interest of trade, commerce & industry of Vidarbha region.

P. Srinivas, Sr. Commercial Specialist introduced Ms. Camille Richardson, Commercial Consul and briefed that U.S. Commercial Service (CS) trade special are linked to more than 100 offices in United States. Their expert industry knowledge and relationships with American businesses will help to trade, industry, U.S. Suppliers and facilitate potential business partnerships in the U.S. their assistance are customized lists of U.S. companies, trade leads, introductions to U.S. companies, appointments with U.S. exhibitors trade shows. He also said that there is an International Buyer Program in the year 2014, where various Trade Show Programs will be held. He desired to know the scope of U.S. business at Nagpur- Vidarbha

Dipen Agrawal, President presented the scenario of Indo – U.S. Trade. He said “Trade and Commerce form a crucial component of the rapidly expanding and multi-faceted relations between India and US. From a modest $ 5.6 billion in 1990, the bilateral trade in merchandise goods has increased to $ 57.8 billion in 2011 representing an impressive 932.14% growth in a span of 21 years.

Trade during the period January – September 2012

Dipen Agrawal, President said that Vidarbha region is immensely rich in minerals, dense forests, tourists places specially for wild animals, cotton and vast scope for IT sector Industrial infrastructure, MIHAN-SEZ, uninterrupted power supply, ample of water and land are the positives of this region. He desired that U.S. would establish its commercial services office at Nagpur and attract global markets.