An early first half goal and a late second half strike were enough to ensure the first victory for 21 Warriors as they defeated Vatsalya Riders 2-0 in the second match of the evening played at Yashwant Stadium in the fourth season of Lokmat Nagpur Premier League Football Tournament.
After three consecutive losses, Vatsalya Riders are on verge of elimination. The match started on an aggressive note when 21 Warriors looked to capitalise at every opening that they realised in the Riders defense. Moin Kamal opened the scoring as soon as the 4th minute. The Warriors seemed to have put some practice into their set-pieces as a corner taken by Mohd Shujat bubbled up comfortably inside the box for Moin to set the tone for the rest of the half.
The Riders had a good chance to equalise when Mehul Rana shot went skimming past the post in the 20th minute. As the half progressed, the difference between the two sides would have been even more had it not been for some brilliant saves made by the Riders’ goalkeeper Alim Shaikh.
Another good chance to level the scores was missed, now by substitute Ravindra Singh in the second half when his shot failed to hit the target in the 52nd minute. The Riders kept pushing for that one goal that was the difference between the two sides, and in the process played some good passing football and created certain moves that pleased the eye of the viewer but there was actually no one who stood up to finish the ball well. As they pushed more players forward, they left themselves vulnerable on the counter attack and were punished by 21 Warriors’ icon player Mohd. Yaseen in the last few minutes of normal time. In the 89th minute, the Warriors broke away on the counter from the left flank. Vijit Shetty dribbled a defender before delivering a low cross inside the box, and Yaseen stretched out to slot the ball home and assure that the Warriors took home all the three points this time around.
They could have added one more in injury time as Alim Shaikh made another excellent save, but it was not enough to rescue the Riders from a third consecutive loss which saw them drop right at the bottom of the points table. 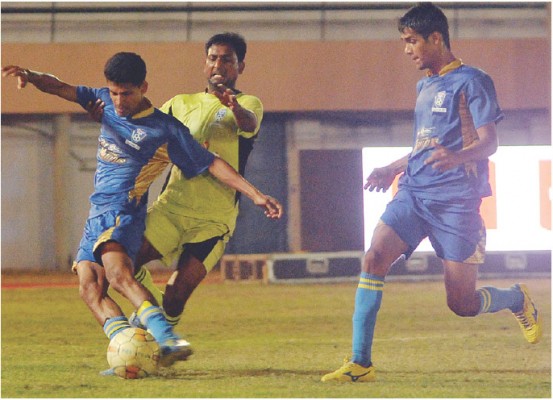