Nagpur News: 21 Warriors ousted Meghe United on 8-7 on penalties after regulation time ended with the scores levelled at 1-1  in a close contest to determine the third position in the fourth season of Adani presents Lokmat’s Nagpur Premier League (NPL) Football Tournament at Yashwant Stadium on Friday.

Meghe United, who were favourites to lift the trophy this time after finishing first post the league matches, have finished the tournament at a dismal fourth position. They have been twice unlucky in two consecutive penalty shootouts – once in the semi-final against Ashwamedh Royas and again on Friday. But they have only themselves to blame as they had been the better team during regulation time in both the matches. They had higher possession, defended well,  also created better chances but the major drawback for Meghe was their poor finishing. 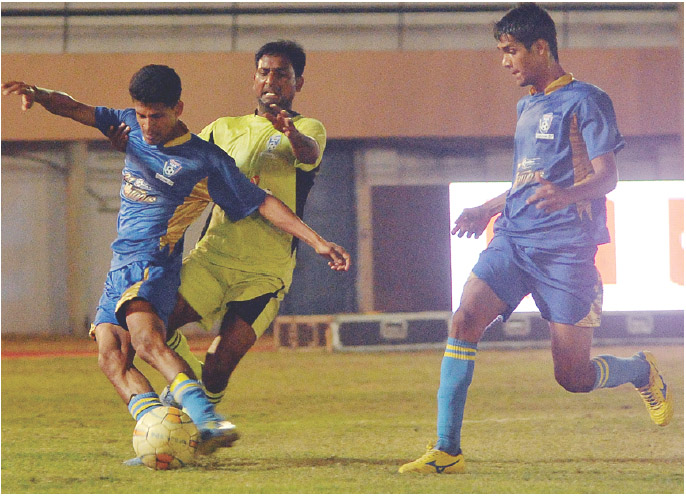 On Friday too, they had 20-odd chances in good positions, but managed to score just the solitary goal. This time Michael, who replaced the misfiring Sorabh in the starting line-up, looked out of sorts. Action began as soon as the 6th minute where Michael was in front of an open goal but couldn’t time his header well. Ironically, the first example of good finishing was witnessed at the other end, in spite of the opposition creating limited number of chances. Md. Yaseen struck a screamer past Owais in the 23rd minute from outside the box to open the scoring for the Warriors. All defenders were in position but neither them, nor the keeper had any chance to even move. With this strike, Yaseen is now Numero Uno in the Golden Boot list of contenders.

The last few minutes of the first half saw Aboo Bakar’s header cleared off the goalline. Good moves were flowing thick and fast for Meghe and they were finally rewarded in the 62nd minute. Michael received a ball in the box from the right flank and in the process of taking a shot collided with the keeper. As a result, the ball landed comfortably in Aboo’s feet, for him to equalise.
Sorabh thought that he had scored in the dying moments of the game, only to see the assistant’s flag raised.
Another draw resulted in another penalty shootout which saw both sides take nine penalties each. Warriors’ Asheer Akhtar saw his penalty saved, whereas Javed and Sameer missed the target for Meghe United.