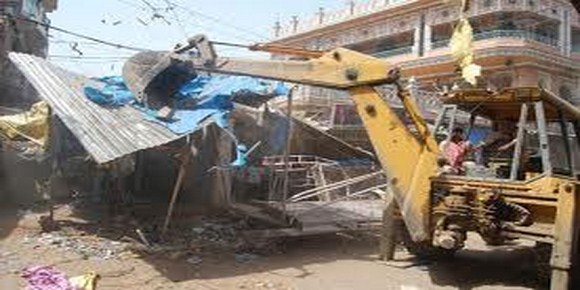 Nagpur News: The Nagpur Municipal Corporation’s (NMC) Enforcement Department carried out an anti-encroachment drive in Mangalwari Zone-10 and Dhantoli Zone-4. During the drive a scrap dealer’s material in good quantity was seized on the Mecosabagh Road. Similarly, about 20 encroachments like handcarts selling various stuffs were removed and seized on the road from Bridge No. 10 to Kamptee Road to Vidyapeeth Shahid Square. A total of gang charge to the tune of Rs 11,000 was recovered from the encroachers.

However, the Enforcement Department’s anti-encroachment squad had to return empty handed when they reached to one Deepak Tiwari’s Gawalipura, Sitabuldi residence to demolish structure on the first floor of the house. The tenant of the house had locked his house which was supposed be demolished as it was constructed illegally. When the squad approached Sitabuldi Police Station for “panchnama”, the police refused to provide policemen on the grounds of insufficient staff. This forced the squad return without carrying out the action.

The drive was undertaken under the directive of Assistant Commissioner of Zone 10 Varhade.