The Swatchhata Corporation, given contract for sweeping and cleaning 100 kilometers of roads daily in Nagpur with hi-tech machineries, gobbled up lakhs of rupees of the NMC by bogus claims. The bogus claim was even made by the contractor amidst heavy to very heavy rains the city received in June, July and August and was also paid lakhs of rupees without inspection by the NMC’s Health Department officials. 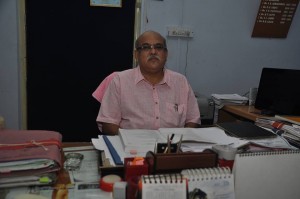 The hotly debated sweeping and cleaning of roads scam involving the Swatchhata Corporation, the contractor given responsibility of cleaning and sweeping of roads, and the conniving officials of NMC, has reached its logical end. The NMC Commissioner Shyam Wardhane has ordered the Departmental Enquiry against the high-profile Deputy Director of Health Dr Milind Ganvir, Health Officer Dr Urkude, and two other officials for their alleged role in the scam.

The Swatchhata Corporation, given contract for sweeping and cleaning 100 kilometers of roads daily in Nagpur with hi-tech machineries, gobbled up lakhs of rupees of the NMC by bogus claims that roads were swept and cleaned by its sophisticated Elgin machine. The claim was made by the Swatchhata Corporation amidst heavy to very heavy rains the city received in June, July and August. And the Swatchhata was also paid lakhs of rupees without inspection by the NMC’s Health Department officials. However, the dubious deal got public and saw NMC Administration probing the “deal” by two high-level committees set up by NMC Commissioner Wardhane. The committees found that the roads were not at all cleaned and swept by the contractor as claimed by the contractor. The committee carried out surprise inspections of roads but found no hi-tech machineries that were supposed to clean and sweep the roads. A massive difference was noticed between the fuel used and mileage record. The aspect of the great difference and other nasty facts were mentioned in the probe reports of the two committees.

According to reports, Nagpur was battered by heavy to very heavy rains in the months of June, July and August. And the Swatchhata Corporation, too, received a “windfall” in the form of clearing of bills to the tune of lakhs of rupees by NMC. The contractor had submitted bogus bills of sweeping and cleaning city roads, of course, with the connivance of NMC’s own Health Department officials, sources said. However, even after the “bogus” deals came in the open, the NMC Administration maintained a radio silence over the matter for almost two months.

The bills were paid in the best possible haste thus ensuring “sweeping and cleaning” of NMC coffers and not the roads. The contractor was paid claim amounts on the four occasions including Rs 6.94 lakh, Rs 11.96 lakh twice and Rs 7.72 lakh. The NMC issued notice to the contractor in this “bogus” deal. The Swatchhata Corporation was slapped with a notice by the NMC Administration in this connection. The Swatchhata Corporation, in its reply to notice, accepted the fact of bogus dealing on its part. However, lakhs of rupees have already been gobbled up by the contractor and thus putting the NMC at loss in lakhs.