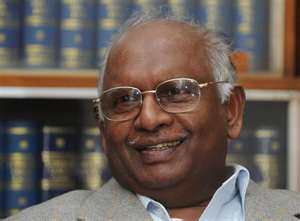 Nagpur News: A delegation of the National Human Rights Commission, headed by Justice K.G. Balakrishnan, will be in Nagpur in Maharashtra for an ‘open hearing’ of about 571 cases relating to atrocities against Scheduled Castes and the problems faced by them in seeking justice from the State Government agencies. NHRC Members, Mr. Justice B.C. Patel, Mr. Satyabrata Pal, Registrar (Law), Mr. A.K. Garg and senior officers of the Commission will be part of the delegation.

The Commission had invited complaints for this open hearing for which about 1400 complaints were received. Out of these, 571 were short-listed for calling reports from the concerned authorities which would be taken up during the open hearing at Nagpurfrom 28th-30th January, 2013. The Commission has also identified 29 cases that would be taken up during interaction with the officers of the State Government at a meeting in Mumbai on the 31st January, 2013.  These mainly comprise complaints on denial of benefits of social welfare schemes, police inaction, malpractice of revenue authorities, non-payment of retirement benefits, forcible dispossession of SCs from their lands among others.

The open hearing will be inaugurated by the NHRC Chairperson at Late Aba Saheb Khedkar Sabhagruh, Zila Parishad, Civil Lines, Nagpur at 10:00 AM on the 28th January, 2013.  The hearing of the cases will start from 11:00 AM at Ravi Bhawan, Government Rest House, Civil Lines. The venue of the public hearing for the next two-days will remain the same.

On the 31st January, 2013 the Chairperson, Members and senior officers of the Commission will hold meeting with the representatives of NGOs at State Guest House in Mumbai from 10:00 AM to 11:30 AM. Thereafter, a meeting of senior officers of the State Government, including Chief Secretary and DGP, will be held from 11:45 AM to 01:30 PM at the same venue.  On the same place and date at 03:30 PM, the NHRC Chairperson accompanied by Members and senior officers will address a press conference on the outcome of the open hearing.

Prior to this, the Commission has held four open hearings of complaints on atrocities against Scheduled Castes in Odisha, Gujarat, Tamil Nadu and Rajasthan. The Commission has decided to hold such open hearings to reach out to the Dalits and hear their complaints about violations of their rights by the public authorities. The decision is based on the recommendations given by Mr. K.B. Saxena, IAS(Retd) in his report, commissioned by the NHRC, on the continuing problems faced by the Scheduled Castes. The report is available on the NHRC website: www.nhrc.nic.in.

Among the recommendations Mr. Saxena made was one that the Commission organise at least one open hearing a year “where the victims of major atrocities can present their experiences and grievances in seeking justice from Government agencies and human rights bodies/non-governmental organizations/social workers and activists may apprise the Commission of difficulties encountered by them in taking up their complaints. In the interaction with the State Government subsequent to the hearing, the Commission may convey its observations and advice on various actions to be taken for effective enforcement of law, sustaining confidence of victims and, where required, looking into the conduct of officials coming in for adverse reference during the hearing. The follow up action on the hearings may be monitored.”

The National Human Rights Commission, right since its inception has been actively engaged in protection and promotion of the rights of Scheduled Castes and Scheduled Tribes. Apart from taking cognizance suo motu and on complaints relating to atrocities against Scheduled Castes, the Commission has also engaged with key stakeholders on the issue; published booklets; and held training programmes and workshops aimed at sensitizing various stakeholders on the issue so as to eliminate atrocities, discrimination, and any other form of violation of their human rights.

The Commission co-organized a National Consultation on “Strengthening Civil Society Initiatives for Scheduled Castes” with the National Campaign on Dalit Human Rights in December, 2007 in New Delhi.

The Commission also took a decision to launch awareness campaigns in four districts which had a high record of atrocities against Scheduled Castes. In this connection, members and senior officials from the Commission visited Bharatpur in Rajasthan;Faridabadin Haryana and Jaipur andAjmerin Rajasthan.