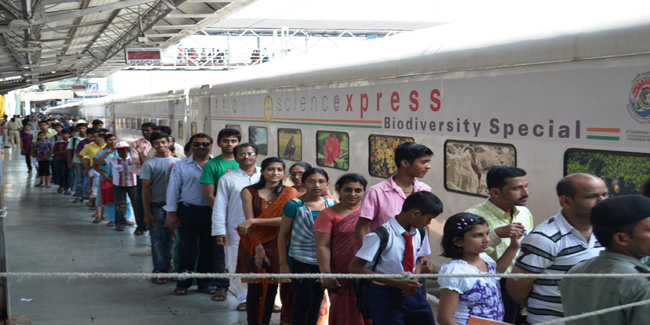 Nagpur Education News : Science Express- Biodiversity Special (SEBS) was opened for Nagpurians at 10:00 am today.  Over 5,000 people from the city visited the train today.

The train will be covering 52 locations across India, from September 5 to December 22, stopping for 3- 4 days at all places. Entry is free for people of all age groups and occupations interested in learning more about the environment and about endemic species of different places across India.

“This is an effort to take Science to the masses,” said Mr. Sudhirkumar Sharma, manager of the project, “A museum is normally stationary, this one is travelling across the country. People from all over the country will get to know about local species of different places in India, through one single source. One can’t always afford to go to the forests of Gir to see a lion. Now, they can get a nearly realistic experience in their own city. It’s also a means of motivating people, of letting them know what species are in and around the area and how they can be protected”.

Gauri Deshmukh, a chartered accountant in the city, brought both her sons to visit the Science Express. “My elder son is seven years old,”, she said, “even he doesn’t pay complete attention throughout thevisit, the expo will still boost his interest in the environment and in Science. This is a good way to increase general knowledge in children.”

Pooja Tonge, a class XI student in the city, had brought along her father and her younger brother to see the exhibit. “It’s interesting; it’s something different”, said Chandrankant Tonge, her father.