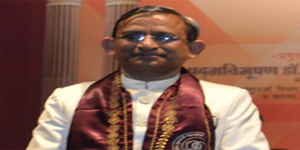 Nagpur News: The Nagpur University management council has decided to table a calling attention motion against vice chancellor Vilas Sapkal after Bombay High Court strongly criticized the administration for cancelling the admissions of ‘ineligible’ MCA students at a later stage. The calling attention motion by Dinesh Agrawal will be tabled during the emergent meeting scheduled for Tuesday. Other members are likely to support it.

It flays vice chancellor Sapkal for his alleged failure to perform his duties as mandated in the section 14(5) of the Maharashtra Universities Act, 1994. He called on the members of university’s highest statutory body to direct VC to ensure that the admissions, enrolment and resultant permission for regular students to appear for the exams were done in strict accordance with the mandate incorporated under Ordinance No 1 and 2.

He also sought evolvement of ‘suitable standing mechanism’ for granting admission by the management council and requested the members to convene a special meeting to discuss the issue. A copy of the motion was also emailed to chancellor K Sankaranarayanan’s secretary Vikas Rastogi and his nominee on council Sanjay Khadakkar. He pointed out that it was due to media reports that NU authorities realized their mistake of having conducted examinations in violation of ordinances.

Citing court’s observations in the MCA students’ case, Agrawal stated that NU had to fine tune its own machinery to ascertain eligibility of a student at the threshold and also ensure that the colleges do not admit ineligible candidates. PRO Prashant Mohite couldn’t be contacted for his comments.

Earlier on Friday, the court granted relief to the five MCA students who were expelled by Ramdeobaba Kamla Nehru College of Engineering after being found ineligible by NU.