Nagpur News: Though it was officially announced as engagement for the reasons best known to the ace cricketer of Vidarbha Umesh Yadav ala ‘Vidharbha Express’, but the secret has been dug out from under the wraps that Yadav was actually not engaged but married to Tanya Wadhwa in a secretly planned ceremony in Nagpur on Monday.

In a sudden move Umesh reportedly called registrar at his place and took marital vows with all rites and rituals.

Surprisingly, the ceremony is being pronounced as engagement but videos with Nagpur Today reveal other side of the tale. Contrary to what was aired in media, the video clearly shows that Umesh and Tanya witnessed something more than the ‘engagement’. 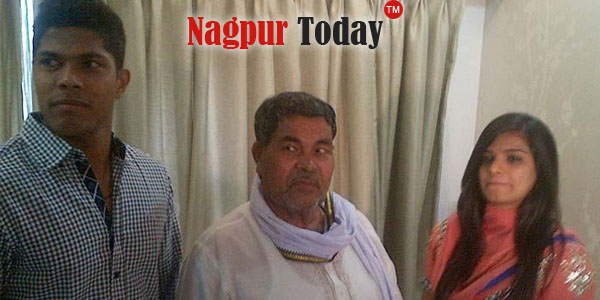 Tanya, a fashion designing graduate, hails from New Delhi and has been into relationship with Umesh Yadav for over one year. The two were often spotted hanging around in Delhi. When Umesh used to stay in Delhi during his matches, both of them were seen sharing vibes at many public spots. Their comfort level with each other went much more than usual friendship, however, nobody noticed the change then.

Umesh and Tanya had applied for marriage to registrar a month back and on Monday both of them entered marital bliss.

Sources informed that since Umesh is currently part of IPL bandwagon, he could not enter into marriage during the contract period. Hence he is trying to hide the truth about his marriage.

Talking to media, Umesh said that the ceremony is performed upon the consent of both the families.  However, not a single member from Tanya’s family was present on the occasion.

Umesh is representing Delhi Dare Devils in IPL6. He will be playing his first match on Tuesday post his marriage.