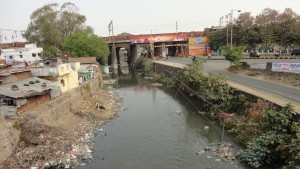 The river, today, looks little more than a common drain flowing through the city

Nagpur news: Nag River, a river flowing through the city, is known as Nagpur city’s namesake. The river was once a major source of livelihood, as well as a centre of activity for the city. It originates in Ambazari Lake and merges with the Pili River before pouring into Kanhan River.

The nineteen kilometer stretch of Nag River is extremely polluted today. The present generation knows it is as a mere channel of muddy water.  But once upon a time Nag River was a full, fresh water river and important cultural events of the city would take place on its banks. Today, only garbage is present in it.

Social worker Umesh Chawbe said, “The last time Nag River was entirely holistic and clean was back in 1936. Former Chief Minister Vilasrao Deshmukh had raised this issue in the year 2002-2003, during Nagpur’s 300 year celebration ceremony. He had announced his intentions to clean the river, in the press conference.”

Mudhoji Bhosle, a Bhonsle Raja, said, “The NMC has been increasing the size of roads and and consequently reducing the width of the river for years. Back in the year 1965, washermen had their own ghat on the riverbanks. Reshimbagh and Tulsibagh were cultivated by farmers. The water from the river was used to water gardens. Many temples were situated near the river. Mahashivratri and Nagpachami cultural programs were organized on its banks.”

Kaustubh Chaterjee, founder of environmental NGO Green Vigil said, “The River now serves as drainage for the city. 450 MLD (Million Liter per Day) polluted water from bathrooms, kitchens and toilets is mixed with the Nag river. The Pollution Control Board Act states that water should be treated before it is released into the river. Its ecosystem is extremely polluted by urban and small industries waste. Bhandewadi has a 100 MLD water treatment plant, which is not sufficient for the city.”

Arindam Gosh, former Head, Department of Research, National Environment of Engineering Research and Institute (NEERI) said, “NEERI had recently submitted a report on children living near Nag River, which observed that most of these children suffer from respiratory problems Today NEERI has the technology, research personnel and manpower to convert polluted water into clean water.”

Nagpur Municipal Corporation (NMC) and the Central Government had funded a Channel Project worth Rs. 248 cores for Nag River. During his term from the year 1995 to 2000, former Mayor Devendra Fadanvis had initiated a programme for the beautification of Nag River, in collaboration with Ecocity Foundation. After that, a river protection project worth Rs. 30 crores was implemented for Nag River.  NMC contributed to this fund. Yet, NEERI made pollution reports of the river today throw up shocking facts. There will clearly have to be more efficiency and transparency within the corporation, if a river with much potential in this drought- prone area is to be saved.