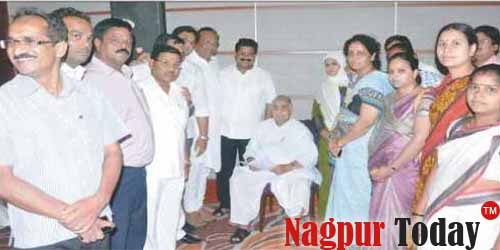 Delegation of Congress corporators called on the committee under the leadership of Vikas Thakre.

Nagpur News: Leader of opposition in NMC,Vikas Thakre has demanded the parliamentary committee to constitute a committee having Union and State governments’ representative and a member of NMC to keep check on irregularities being done in tendering process of JNNURM projects.

A delegation of Congress corporators called on the committee under the leadership of Vikas Thakre. He further said that NMChas been implementing 19 projects under JNNURM but only three are on way of completion. The committee was shown only these three projects today because work of other 16 projects is not satisfactory.

Misappropriation took place in giving tender of water pipeline work to Nagarjun Construction Company. Star buses which were received under JNNURM are in shabby condition. Out of 240, hundred are not plying on road as operator has neglected maintenance of these buses. The committee in its earlier visit had given negative report about these buses. Even after this, NMC had not slapped fine on operator Vansh Nimay Company. If funds of Central government are spent in such way, it will benefit contractors instead of common people. Such attempts should be stopped, demanded Thakre.

Report about shortcomings in implementation of the Jawaharlal Nehru Nation Urban Renewal Mission (JNNURM) scheme in Nagpur will be submitted to Central urban development ministry and action will be taken accordingly, said senior member of urban development committee of the Parliament, Kailash Joshi said.

“The condition of Nag river is not good. It needs improvement. The NMC proposal regarding cleaning of Nag river will be considered,” added Joshi.