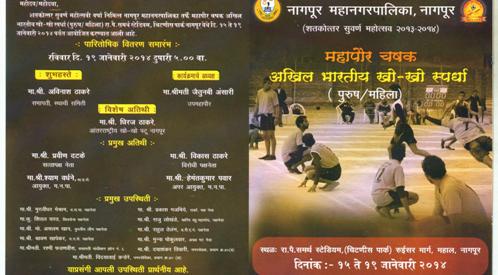 The Nagpur Municipal Corporation (NMC), as part of its 150th Year Celebration, is organizing Mahapor Chashak (Mayor’s Trophy) All India Kho-Kho Championship (Men/Women) from January 15 to 19. The Championship will be inaugurated at 4 pm on Wednesday by senior BJP leader Nitin Gadkari while Mayor Anil Sole will preside over the inaugural function. The competition is being held at Samarth Stadium (Chitnis Park), Mahal in Nagpur.

The Chairman of NMC’s Sports and Cultural Committee Harish Dikondwar, Chairperson of Education Committee Chetana Tank, and the Education Officer Dipendra Lokhande have appealed citizens to grace the function in large numbers.

Similarly, several Corporators and other dignitaries would visit the Championship sessions from January 16 to 19 as goodwill visits