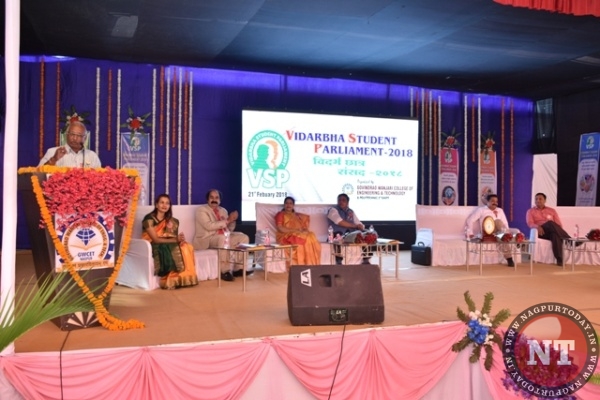 Vidarbha Student Parliament was initiated in 2017 which comprises the topics that are mostly the current social issues related to youth’s development of Vidarbha. The VSP is an event which gives an opportunity to involve and express the positive and effective views of students from all across Vidarbha for the future progressive development of the Vidarbha. Our approach has to be, not “what does a good citizen know?” but “what does a good citizen do, and what must he know to do it?” Education cannot be imparted merely by providing students with factual information. We have to think not only in terms of developing technical competencies in students but also in terms of influencing their attitudes which are essential for inculcating social values on right lines. The VSP can impart and inculcate some real value education with cause.

Following issues and topics which will be covered during this VSP-2018 are:

The entire resolutions passed at VSP-2018 will be compiled as the declaration of Vidarbha student voice & submitted to the relevant policy making bodies.

The Chief Guest for this gala event was Former MLA, Vidarbhawadi Wamanrao Chatap. At the inaugural function of VSP -2018 he said that it is a good initiative taken by GWCET, Nagpur. While interacting with students he said that it is the time of Global Competition and today’s student should take this as a challenge and go ahead for it. He also highlighted that Paschim Maharashtra has been benefited by previous all governments and Vidarbha has been neglected from beginning itself. Now it is the time that student should look after this situation and prove themselves in what way they will be beneficial for Vidarbha. He asked students to focus and absorb Four C’s – Computer, Competition, Confidence and Character.

The first session washonored by Atul Londhe, Spokesperson, Indian National Congress, who shared his views on the topic “Ruling government vision-mission for overall development is a fact or fallacy?”

The second session was honored by Chandrakant Wankhede, who promisingly shared his idea on“Is Loan waiver scheme the only solution for reducing farmer’s suicide?”

The next session was chaired by Prabirkumar Chakravorty, where he highlighted his views on the topic“Is advanced technology crippling or strengthening us virtually?”

The last session that had the topic “Is a GST a game changer or game spoiler?”was promisingly chaired by Tejinder Singh Renu.

Adv Abhijit G Wanjari, Secretary, Amar Seva Mandal was also present for this event who shared his views on Vidarbha Student Parliament 2018. In his speech he said that this event has given the stage to the students of Vidarbha to showcase their talent. He emphasized students to develop themselves so that India will grow as per the dreams of our beloved former President of India Dr A P J Abdul Kalam by 2020. He also congratulated the faculties and students for successfully completion and efforts taken for VSP -18.

Dr HemantSonare, Director, Wanjari Group of Institutions was also present at this gala event who expressed his views on this occasion that India will remain a young country as maximum population are in mid 30’s. Later he highlighted that VSP-2018 has given a thought process to young minds of Vidarbha. Prof L A Yelmule, Convener, VSP-2018 expressed her views and delivered Vote of Thanks.