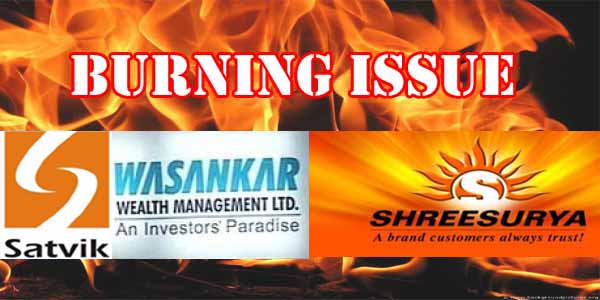 Nagpur News: After EOW has arrested directors of ‘Shreesurya Group’ under charges of cheating of 10 thousand investors from farm crisis hit Vidarbha and Marathwada lured with towering return dumped now recently another two wealth management companies one floated by Dr.Prashant Wasankar and another floated by Amol Dhake titled Satvik Financial Services Ltd. have been reported to be involved in same illegal acts and facing same fate ,they have trapped more than 10,000 middle class and old aged pensioners by promising very high returns of schemes which were never allowed by RBI or SEBI nor these companies got any legal permission to do but they are till looting innocent investors as administration is protecting them hence Maharashtra legislators are being humbly requested take up this serious issue on the floor of house as winter session in progress in nagpur itself, Kishore Tiwari of Vidarbha Janandolan Samiti(VJAS) informed in press release today.

Nagpur has been rocking with such stories of Mega Investment Scam and it is alleged that these so called wealth management companies has sussefully eroded eroded the hard earn money of more than five thousands innocent people offering high dreams of rich future within short span of time as per documents attached with this complaint that Wasankar who is charging huge amount membership amounting more than Rs.One lakh per annum collected more than Rs.2000 crore giving post dated cheques offering around 30% interest on deposit nut now forget the interest investors are finding difficult to get back their own money more over, this firms run Dr.prashant Wasankar company and Amol Dhake titled Satvik Financial Services Ltd are not registered with any regulator under finance ministry or Reserve Bank of India or Securities and Exchange Board of India (SEBI) for collecting such deposits which is illegal as per GOI acts and Mah.state’s money leading act. but nobody has questioned the company as on today hence Maharashtra lawmakers are to ask Govt. to initiate the action under Maharashtra protection of investors deposit act 1999 (MPID) against Wasankar Group promoters in order to save these investors ,Kishore Tiwari demanded.

“The grid of investors or depositors to higher return is leading to innocent victimization in which most victims are middle class pensioners hence we are urging CM to have urgent intervention to get back basic capital of these dying old age pensioners as we have received lot complaints that Dr.Prashant Wasankar has denied to pay back capital sighting the reasons of financial crisis hence state should give him financial bailout package as all illegal activities of Wasankar and amol dhake are being promoted and protected by Babus ,police and other hostile pillars of democracy” Tiwari added.
In letter open letter to all MLA/MLC it is requested that that Dr.Prashant Wasankar and Amol Dhake have been working in Nagpur as sub-broker of BSE-NSE capital market since last two decades ,have earned the confidence of investors to larger extend and has been writing in local newspapers on wealth creation solutions and arranged investors meet in all metros of India and abroad ,is having active operation in Australia and Singapore but his real activities of running fishy and illegal deposits schemes offering interest rates more than 1.5% has been reported in Feb,2013 and when shreesurya scan was reported , cracks to the trust of wasankar developed and investors panic of getting capital money back has exposed the bankruptcy of wasankar group and investors realized they have been dumped and cheated by fraudulent misleading investment advices given by Dr.Prashant Wasankar ,has approached VJAS to get back their hard earn life time earning hence CM Maharashtra has been urged to intervene in the matter as local politicians are covering misdeed of Wasankar ,Tiwari added.

VJAS has attached promissory notes and cheques given Dr. Prashant Wasankar and Interest chart signed by himself offering the schemes that double the money with 30 months and offering a membership collecting Rs lakhs of rupees then members where asked to give fix deposits and but now investors are demanding the return of the capital but Dr.Prashant Wasankar has failed to return the money and he has been asking the investors to wait sighting recession in share market and helpless investors are crying before the office of Wasankar Group and in the plea to CM of maharashtra VJAS has drawn the attention of administration that all deposits collected by the Wasankar company are illegal and has no legitimate status where as he has been fully protected by local Police Authorities, SEBI, RBI, Govt. of Maharashtra etc. and activities of Wasankar Wealth Management Group and Satvik Financial Services Ltd. is nothing but money laundering activities and it has international network too, Tiwari added.