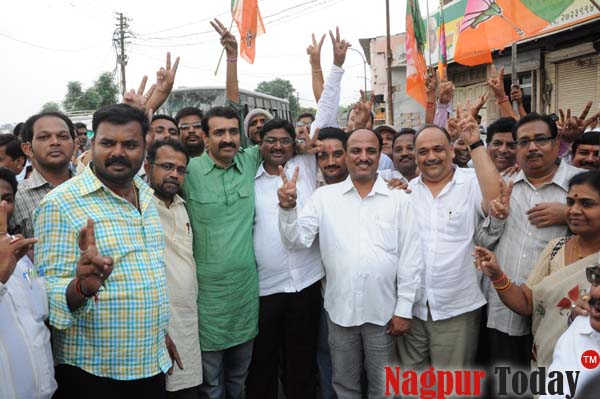 As the Legislative Council elections approach nearer, the parties have picked up their strategy to project the perfect candidate in the poll battle. The votes in this election are polled from registered graduate section. Like every year, this year too will see maximum prime candidates from Nagpur.

As far Congress is concerned, there is not much apparent fight for the ticket. Baban Taywade, principal at Dhanwate National College here is considered as the strong candidate from the party, while Kishore Gajbhiye with his effective dalit portfolio also cannot be ignored. Gajbhiye stands fair chance to become strong contender owing to the crucial votes he hold.

The real battle however is quite visible within BJP whose leaders Mayor Anil Sole and Sandeep Joshi have been vying for the ticket since long. However, poll analysts find Joshi more suitable than Sole for the candidature. The people of Nagpur have already gauged the potential of both the leaders and hence their choice can be easily predicted going by the work profile of both of them. During his tenure as the standing committee chairman, Joshi had proved his art of leadership while maintaining his decorum.

On the contrary, Mayor Anil sole does not have any remarkable achievement to his credit till date. Sole has been tagged as the savior of the corrupt officers and employees in NMC. He was often accused of restricting his associate corporators from speaking anything against the officials, notwithstanding the malfunction within the system. Experts viewed that Sole has earned a bad name for his self-proclaiming nature and being averse to the positive steps taken by the NMC administration. His orders are always side-lined in the civic body. The officers are known to tackle Sole with ease, just to keep their odd function flowing.

Poll analysts have sounded caution for BJP in picking up the right candidate. Another leader Dayashankar Tiwari has been also considered as the fit choice for the election as he scores a lot over Sole. Tiwari’s ideology of following his words in letter and spirit is often envied by his opponents. He has proved his mettle time and again and is considered as the leader with the voice which even top officials cannot dare to ignore.

If BJP makes it for Tiwari, then it will surely have strong voice for raising Nagpur related issues in Legislative Council. While the rank and file of both Sole and Tiwari in BJP are of equal status, the difference lies in attitude and behavior. While Sole has made an air of opposition towards him owing to his ill mannerism, Tiwari has garnered support and earned greater magnitude setting strong political pitch for him.

However, the party high commands at state and national level have to take the final call in this regard, the decisions appear to be poles apart. If the state president has its say then Sandeep Joshi will be picked up, while former national president will prefer Sole to others.  But, if both come together to look for strengthening the party, then Tiwari can be accorded candidature.

Whatever the decision goes, the elections are sure to demand all round efforts from all to tame the tough game ahead.