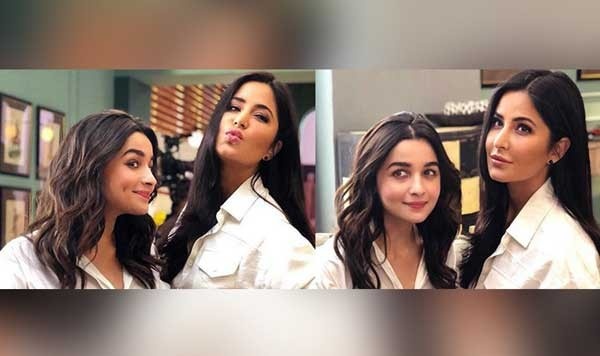 Katrina Kaif and Alia Bhatt have been the Best of Friends. They even appeared as each other’s BFFs on Neha Dhupia’s BFFs with Vogue. However, ever since rumours of Alia dating her Brahmastra co-star Ranbir Kapoor, who also happens to be Katrina’s ex-boyfriend, started doing the rounds, there were reports of Alia and Katrina having a major fallout. Rumours suggest that Katrina is deeply hurt with Alia’s closeness to Ranbir and is thus not in talking terms with Alia. However, today Kat herself posted a pic as her insta story dedicated to Alia Bhatt, which just goes to show that all is infact quite well between the two ladies.

Well, today Katrina posted a picture of a story about Alia’s film Raazi entering the Rs 100 crore club. Not just that. Katrina also wrote, “Congratulations @aliaabhatt. Well Deserved.” For the uninitiated, Meghna Gulzar’s film, Raazi, crossed the Rs 100 crore mark in just 17 days at the domestic box office and is the first niche women centric film to have achieved this stupendous feat. Meanwhile, the two of them are definitely setting friendship goals for us. Take a look at Katrina’s story below :

Meanwhile, on the work front, Alia is enjoying the success of Raazi. She has wrapped up the shoot of Zoya Akhtar’s Gully Boy and has started shooting for Kalank along with Varun Dhawan. On the other hand, Katrina Kaif is balancing between Aamir Khan’s Thugs Of Hindostan and Shah Rukh Khan’s Zero. Watch out this space for more updates.