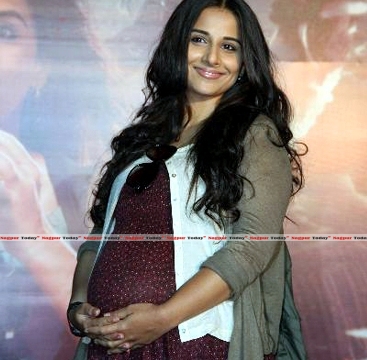 Vidya Balan had remarkably played the character of married woman in her upcoming movie Kahaani before her marriage with Siddharth Roy Kapoor last year. Now we heard that Vidya is carrying that role forward in her real life too. Yes speculations are churning out in the gossip mills that Vidya is pregnant and making frequent visits to check up at a multi speciality hospital in Mumbai suburbs. However neither Vidya nor Siddharth has officially come out on this matter, but the news gained some fodder in the light of Vidya’s announcement of starting a family in an interview recently.

The actress is busy with the promotion of ‘Shaadi Ke Side Effects’, her upcoming movie with Farhan Akhtar. Her last film Ghanchakkar in which she was paired opposite Emraan Hashmi bombed at the box office.

The actor had confirmed that she has work commitments to honour and family planning would start only after a couple of years. Considering that Vidya married Siddharth Roy Kapur in 2012, her two year planning must have begun. And going by the recent buzz, we cannot help but wonder if our bindaas Balan is going to be a mommy soon?