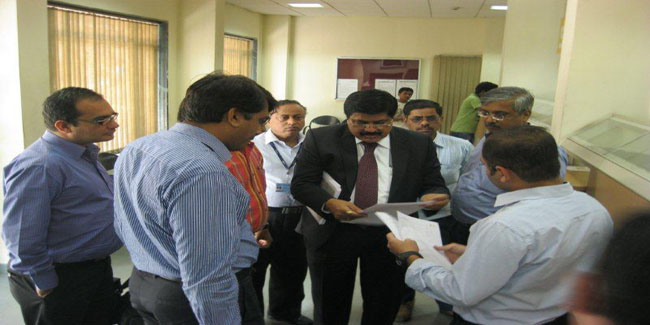 Nagpur News: A team from Paschim Gujarat Vij Co. Ltd (PGVCL) made a 2 day visit recently to the Maharashtra State Electricity Distribution Company Ltd’s (MSEDCL) Mumbai Office at Prakashgad and Bhiwandi. The visit was for studying the successful implementation and operations of ‘Distribution Franchise (DF) Model’ by MSEDCL.

The team was headed by Mr. J.B.Parekh, Chief Engineer (Material), PGVCL with others. Director Finance,MSEDCL, Mr. D.D. Wahval was there to welcome the PGVCL team.

Gujarat is very impressed by the successful ‘Distribution Franchise (DF) Model’ by Maharashtra and has expressed their interest to implement similar Input based DF model.

This two day visit of the PGVCL also included a site visit to MSEDCL’s successful Distribution Franchise Project at Bhiwandi.

Along with the site visit, a detailed presentation of the franchise modelimplementation was given by MSEDCL’s Superitending Engineer (DF), Mr.B.Y. Khandait, and Mr. N.C. Amzare to the team. Mr. B.B. Jadkar, S.E. Nodal Officer Bhiwandi and other officers were also present.

To mitigate the rampant theft and non-payment of electricity bills,MSEDCL under the Electricity Act, 2003 opted for the franchisee model for electricity distribution by handing over the power distribution of Bhiwandi to M/s Torrent Power Ltd; in January 2007.

This experiment proved to be a huge success and has been replicated by many other states throughout the country.The team of PGVCL appreciated the efforts made by the MSEDCL and