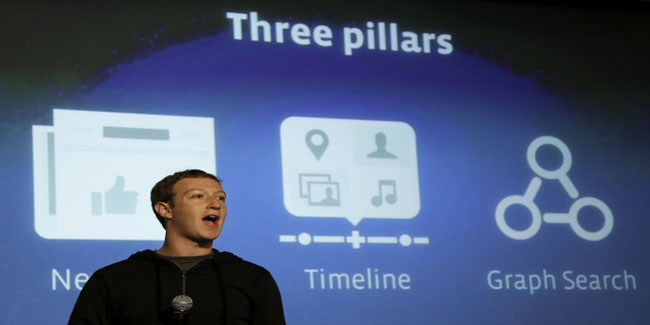 Nagpur News : Facebook CEO Mark Zuckerberg unveiled a new search feature that’s designed to entice people to spend more time on his company’s website and will put the world’s largest online social network more squarely in competition with Google and other rivals such as Yelp and LinkedIn.

Called “graph search,” the new service unveiled Tuesday lets users quickly sift through their social connections for information about people, interests, photos and places. It’ll help users who, for instance, want to scroll through all the photos their friends have taken in Paris or search for the favorite TV shows of all their friends who happen to be doctors.

Although Zuckerberg stressed that “graph search” is different from an all-purpose search engine, the expanded feature escalates an already fierce duel between Google Inc. and Facebook Inc. as they grapple for the attention of Web surfers and revenue from online advertisers.

“This could be another reason not to use Google and another reason to stay on Facebook for longer periods,” said Gartner analyst Brian Blau. “I don’t think Google is going to lose its search business, but it could have an impact on Google by changing the nature of search in the future.”

Facebook’s foray into search marks one of its boldest steps since its initial public offering of stock flopped eight months ago amid concerns about the company’s ability to produce the same kind of robust earnings growth that Google delivered after it went public in 2004.

If the new search tool works the way Facebook envisions, users should be able to find information they want to see on their own instead of relying on the social network’s formulas to pick which posts and pictures to display in their fees, analysts said.

Until now, Facebook users were unable to search for friends who live in a certain town or like a particular movie. With the new feature, people can search for friends who, say, live in Boston who also like “Zero Dark Thirty.” And Facebook’s users will be able to enter search terms the same way that they talk, relying on natural language instead of a few stilted keywords to telegraph their meaning.

Only a fraction of Facebook’s more than 1 billion users will have access to the new search tool beginning Tuesday because the company plans to gradually roll it out during the next year to allow time for more fine tuning.

Not all the interests that people share on Facebook will be immediately indexed in the search engine either, although the plan is to eventually unlock all the information in the network while honoring each user’s privacy settings.

That means users can only see content that’s available to them through other’s privacy settings, Zuckerberg pledged.

“Every piece of content has its own audience,” Zuckerberg said.

Though the company has focused on refining its mobile product for much of last year, the search feature will only be available on Facebook’s website for now, and only in English.

Facebook’s decision to make its foray into search slowly reflects the formidable challenge that it’s trying to tackle. The “social graph,” as Facebook calls the trove of connections between people and things, is “big and changing,” Zuckerberg said. There are 240 billion photos on Facebook and 1 trillion connections.

Indexing all this, he added, is a difficult technical problem the company has been working on.

Although Facebook isn’t trying to fetch information across the Web like Google does, it’s clearly trying to divert traffic and ad spending from its rival. Facebook is hoping to do this by making it easier for its users to quickly find many of the things that are most important to them: movie, music and restaurant recommendations from friends and family; photo galleries of people they care about; and new connections to old friends and other people with common interests.

It’s the kind of personal data that has been difficult for Google to collect, partly because Facebook has walled off its social network from its rival’s search engine. Instead, Facebook has partnered with Microsoft Corp. to use its Bing search engine to power traditional Web searches done through its site. That partnership remains.

“For a certain set of searches, this is going to be far more powerful than Google,” predicted Ovum analyst Jan Dawson.

Yelp Inc.’s online business review service also could be hurt if Facebook’s search feature makes it easier for people to find recommendations from the people that they trust instead of relying on the opinions of strangers posting on Yelp. Facebook’s search tool also will allow people to find people who worked at a specific company – one of the advantages of LinkedIn Corp.’s online service for professional networking.

Facebook doesn’t have plans to show additional ads as people use the new search tool, but analysts said that is bound to change. “If the appropriate privacy protections are in place, this could be a significant boost in value that Facebook can provide to its users and, in time, that will provide some really valuable new advertising avenues for advertisers,” Dawson said.

Google is trying to overcome its social network disadvantage with Google Plus, a service that the company launched 19 months ago in attempt to glean more insights into people’s relationships and counter the threat posed by Facebook.

Helped by Google’s aggressive promotion of the service, Plus boasts more than 135 million people who post information and photos on their profiles. But Google Plus users still aren’t sharing as much or hanging out on its service as long as Facebook users do, raising questions about whether Google will ever be able to grasp the Internet’s social sphere as firmly as Facebook does.

Facebook now must prove it can master the intricacies of search and picking the right ads to show to the right people at the right time – complicated tasks that Google has honed during the past 14 years to establish itself as the Internet’s most powerful company. It currently produces 10 times more annual revenue than Facebook. Though neither company has released its 2012 financial results, analysts are projecting $52 billion in 2012 revenue for Google versus about $5 billion for Facebook.

In an opinion apparently shared by many investors, Forrester Research analyst Nate Elliott doubts the search feature will prove to be a boon to Facebook. He views it as little more of a way for Facebook users to find new friends online more quickly and make new connections that ensure the social network remains relevant.

“It’s vitally important, but it’s also unsexy,” Elliott said. “If Facebook thinks people are going to start searching Facebook when they would have searched Google, then they I think they are going to wake up in a year and find they are sorely mistaken.”