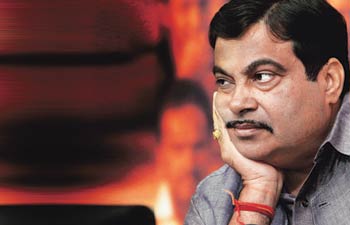 Nagpur News: Close on the heels of his resignation from party’s top post, former BJP national president and senior party leader Nitin Gadkari expressed his willingness to take on the Congress candidate in next Lok Sabha polls from Nagpur. Speaking to a TV anchor on the sidelines of function organized in Delhi on Wednesday to announce the ABP News Best City Awards Survey, Gadkari said that he would contest the next election from Nagpur if the party offers him ticket for this parliamentary constituency.

Gadkari has more recently caught the limelight for wrong reasons as his name was pulled into the illegal land allotment for his Purti Sugar Mills.

Later he caught the eye of storm when he allegedly threatened IT officials to see them once his party is voted to power. However, he apologized for the comment later and clarified that he did not intent to mean that way.

Going by the current momentum, Gadkari has picked up in Nagpur, poll analysts put him on the priority list of the BJP as far as selection of party candidate to contest Nagpur Lok Sabha seat is concerned.

However, it remains to be seen which direction the tide takes turn.