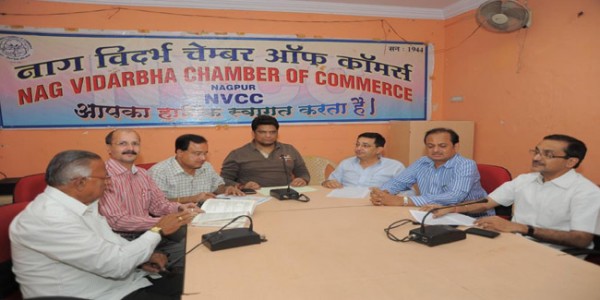 Nagpur  News : That recently Food Safety and Standard Authority has extended six month period for commencement of Food Standard and Safety (Food Products Standards and Additives) Regulation 2011. In this regard a meeting was held in the Chamber on 04th Feb, 2013. Following members ware present.

Shri Ajay Somani stated about extension of six months’ time for commencement of above rules. He further said that in fact these as per provisions these regulations shall come into force on or after 5th August 2011. Its clearly indicates that the date of the same was not fixed hence vide order dated 24th of July 2012 the FSSAI earlier also extended the time till 4th of Feb.2013 towards standards given in aforesaid regulations which are at variance with any of the provisions of the licence already granted is further extended for another six months or till further orders whichever is earlier.

That earlier also this period of extension was extended till 04th Feb.2013. And now same was again extended for the period of six months or till further order whichever is earlier.

That in fact the Food Safety & Standard Authority of India ought to have deferred the entire Food Safety and Standard Act-2006, its Rules and regulation-2011as they are very well aware that till date the FSSAI had not granted recognition and accreditation of the laboratories the Govt Food Laboratories of various State including Maharashtra State.

That as per the provisions of Section 43 of the Food Safety and Standard Act-2006 The Food Authority ought to have notify food laboratories and research institutions accredited by National Accreditation Board for Testing and Calibration Laboratories or any other accreditation agency for the purposes of carrying out analysis of the sample by the Food Analyst under this Act.

The FSSAI forget that Food Testing is very very important aspect for implementation of Food Safety and Standard Act-2006. Now as per law when the Laboratories are not notified as per Provisions of Section 43 then how the proceeding filed on the basis of the report of those are tenable in the eye’s of law.

Now again interesting part of FDA Maharashtra is that the sample were drawn by Food Safety Officer, Proceeding were filed on the say of Designated Officer or Joint Commissioner (Food) before Adjudication Officer. and so called Adjudication Officer is also holding the post of Joint Commissioner, Now here again question arises whether the charge of Adjudicating Officer is given to the Joint Commissioner is in accordance of Food Safety Act 2006. That if we pursue the Provision of Act and circular and clarification issued by the FSSAI. That from bare reading of the provisions of Section 68 of the FSS Act, then it is crystal clear that for the purposes of adjudication under chapter X, an officer not below the rank of Additional District Magistrate of District where the alleged offence is committed, shall be notified by the State Government as the Adjudicating Officer for Adjudication in the manner as may be prescribed by the Central Govt. That question arises that whether Govt. Notification of Maharashtra supersede the provisions of FSS Act which is admittedly Central Act. However FDA of Maharashtra appointed the Adjudicating Officer who are also holding post of Jt. Commissioner (Food) in the same department at all the divisional places are contrary to the provisions of FSS Act and guidelines issued by the FSSAI in this regards.

That from the above stated facts, it is very clear that FSSAI itself is not ready with the required infrastructure; the State laboratories were not notified in accordance with provisions of Section 43 of the Act. The Adjudication Officer in Maharashtra State are not appointed as per provisions of Section 68 of FSS Act and the guidelines issued by the FSSAI. The Standard of Food Articles are not finalized till date. In this backdrop FDA Maharashtra ought not have taken any coercive steps such as drawing of samples of food articles, filing of adjudication proceeding against Food Business Operator so also as the proceedings, pending against food business operators are not tenable in the eyes of law hence same should be withdrawn or dropped by the FDI immediately. That all the process on the part of the FDA Maharashtra amounts to abuse of process of law. Hence Shri Dipen Agrawal, President, NVCC appeals that FSSAI ought to have deferred the Act, its Rules and Regulations for the period of 2 years states in a press note issued by Shri Hemant Gandhi, Hon. Secretary of the Chamber.