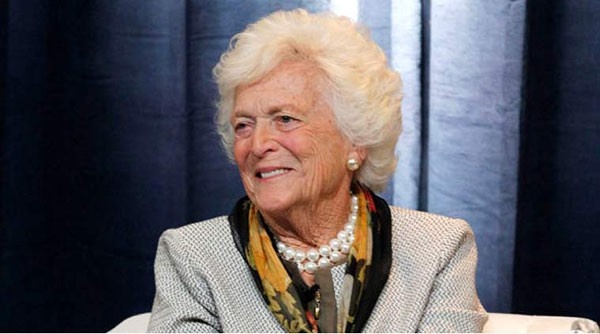 Her husband George Herbert Walker Bush, the former US president and her son George walker Bush, also a former president, were by her side along with other family members when she breathed her last at her Houston home.

“A former First Lady of the United States of America and relentless proponent of family literacy, Barbara Pierce Bush passed away Tuesday, April 17, 2018 at the age of 92,” said a statement from the office of her husband.

Funeral arrangements would be announced as soon as is practical, the statement said.

She is survived by her husband, five children — including former President George W. Bush — and her brother Scott Pierce, as well as 17 grandchildren and seven great-grandchildren.

Over the past few years, she had been suffering from chronic obstructive pulmonary disease and congestive heart failure. In her final days, she decided against seeking additional medical treatment.

Bush was last hospitalised for bronchitis in January of 2017 alongside her husband, who was being treated in the ICU.

Joining the nation in celebrating the life of Barbara Bush, US President Donald Trump and First Lady Melania said Barbara Bush as a wife, mother, grandmother, military spouse, and former First Lady, was an advocate of the American family.

“Amongst her greatest achievements was recognising the importance of literacy as a fundamental family value that requires nurturing and protection. She will be long remembered for her strong devotion to country and family, both of which she served unfailingly well,” Trump said