Nagpur Today: The way the present UPA government in its second term has almost invited the capitalists from foreign countries have made us lose all hopes of a development said the Communist Party of India, Marxist (CPM) polit bureau member and Rajya Sabha MP Sitaram Yechuri while inaugurating the  23rd five-day General Conference organised by the All India Insurance Employees Association (AIIEA). He harped on the theme that there is a possibility of a new world. He urged all the insurance workers to get readied for the upcoming 2014 General Elections and cast their votes in favour of Leftist forces. 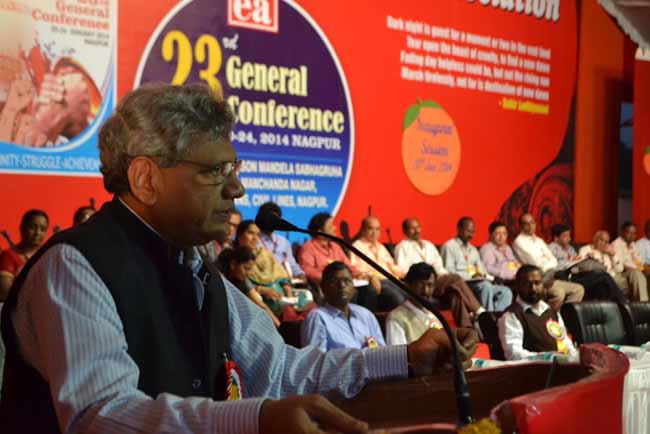 Yechury said that earlier he and some of the members present on the dais had raised some of the pressing issues in the street. Later when he was elected and entered the parliament, he started raising the issues there. He stressed on the point that if everyone worked together, Foreign Direct Investment will soon be banned in India. He said that certain market decisions have to be made and have to be made in proper time. This year is a very important year for the Indian Government. The working class is the deciding class. However, this class had to send more and more representatives to the Parliament to safeguard the interests, he suggested.

He said that the present UPA Government was collapsing under the pressure from foreign capitalism and in order to satisfy themselves and the citizens, it is offering vain excuses that this move of theirs would result in huge investment. 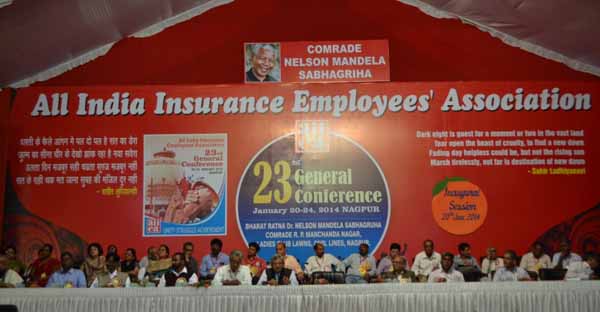 He explained the entire process of how, when the foreigners will come with their investments, they will scale down employment which in-turn weaken the purchasing capacity of the people. The foreign money will be invested into manufacturing and making products. However, if people did not have purchasing capacity, then products will not be sold out. In such a condition, how will we make the people of our country happy and strengthen our economy opined the senior Politburo Member.

He did not spare both the Congress party and the BJP party and while critizing them said that both the parties were least bothered about the future of the country. When the BJP took cudgels of the country into its hands i.e. during the regime of Vajpayee Government, foreign direct investment (FDI) in insurance sector was increased to 26 per cent and the Congress, sitting on the Opposition benches, opposed the move. “Now when the Congress is trying to increase FDI in insurance sector upto 49 per cent, the BJP is saying that it should not be beyond 26 per cent which itself highlights that both the parties are favouring foreign capitalism.

The net result is that the citizens of our country are fed up with both the parties and don’t want both the parties to govern India. They are looking for better alternative and therefore Left force is the only solution to fulfill the dreams of the people.

While explaining his point Yechury said that the rise of the Aam Aadmi Party (AAP) in New Delhi, out of the five states which went to polls, four states witnessed a bipolar mandate excluding New Delhi where the people discovered an alternative in the form of AAP.

However, AAP has no vision document about the economic policy as well as communalism. He added that we don’t want leaders, we want policy-makers (in Hindi Hamain Neta Nahi Neeti Chahiye) and that be the test in which they have to pass in the upcoming 2014 General Elections.

According to Yechury, the outlook of global economy was not good as the IMF and the World Bank had scaled down the growth. This had happened as the economy of the world was being engulfed into capitalism. The US had seen double depression. Maximisation of capital had led to the loot of public money. There had been disinvestment in public services like water, health, etc., which created a gulf between the haves and the have-nots. During the global crisis in 2008, big corporates were bailed out by ample financial packages which had weakened the financial system. The tentacles of bankruptcy had increased in countries like Ireland, Portugal, Spain and other countries of Eastern Europe, he noted. In the recent phase of global crisis, austerity measures were taken wherein the working hours of employees were increased up to 10 hours, pensions were cut, etc.
“All these resulted into struggle in the Europe between the working class and the Government. In the last one year, nine governments have changed in the Europe which indicates that capitalism as a system cannot survive. The only solution is socialism,” he said.

He said that he had demanded to bring the private sector under the Lokpal Bill and tax concessions should not be given to the elite in the society. Bills like Right to Education had been kept in abeyance. The Government had said that it would require an expenditure of Rs 1.75 lakh crore. However, it failed to stop the 2G scam which had engulfed Rs 1.76 lakh crore.

“We had demanded the Government to ensure food to people living in APL as well as BPL Universaly. The Government replied that they needed an additional Rs 95,000 crore,” he took a jibe at the corruption prevalent among the politicians and pointed out that the Government failed to arrest the coal scam which had resulted in an estimated loss of Rs 1.86 lakh crore. Out of the five children who died of hunger in the world, three were from India.

On the contrary, There is another India where the Mercedes Benz launched 125 new car models which was to be sold over a period of a year. He said that surprising all the cars sold out in a record 48 hours. He recalled the words of late Shahid Ludhiyanvi — Woh Subah To Kabhi Ayegi — and said, “We all should join hands to bring that dawn together.” “Hum Who Subah Ko Leke Ayenge”

Earler President of AIIEA Amanulla Khan, said that public sector companies should be under the ownership of the public. “The Government has aligned with the business class and stopped recruitment in insurance sector, even it has stopped issuance of one more pension and trying to increase FDI in insurance sector,” he said. Any move to hike FDI would be opposed strongly, Khan added.

He called upon members to show their strength during the 2014 elections.

At the beginning of the inaugural session, General Secretary of the All India Insurance Employees Association (AIIEA) K Venugopal paid homage to trade union leaders and noted personalities. One of the Eminent economist and Chairman of the Reception Committee Dr Shriniwas Khandewale welcome all the delegates, dignitaries, the observers and the media on the occasion. He pointed out that it a matter a pride to record here that in 1956 Dr B R Ambedkar selected Nagpur to embrace Buddhism at a place called Deekshabhoomi, which has become a place of worship for millions of people. Nagpur is not only called as Orange city due to the juicy and tasty oranges grown around but due to rich forests, the surrounding region is also called as the “Tiger Capital” of India. Thus Nagpur has a pleasant blend of colourful life.