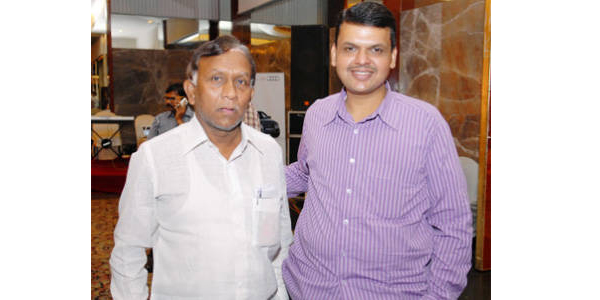 Nagpur News: Bharatiya Janata Party State Unit President and South-West Nagpur MLA Devendra Fadnavis and the BJP Nagpur City Unit President and East Nagpur MLA Krishna Khopde pushed the Maharashtra Government to wall and cornered a Minister on the Green Belt, NDZ, ULC and other issues of reservation in Nagpur during a discussion under Rule 94 over the above-mentioned issues in the Assembly.

The Minister, while replying to a starred question (101623), fumbled and gave a wrong answer thus giving a turmoil-triggering chance to the BJP MLAs Fadnavis and Khopde debated the issue to the hilt. Both the members blatantly charged the Minister with frequently misleading the lakhs and lakhs of Nagpur citizens by repeating the same answer again and again. The BJP leaders accused the Minister of putting spokes in development and regularization of lands reserved under Green Belt, NDZ, ULC. “The Chief Minister Prithviraj Chavan is sitting over concerned files since the past six months, and even after sanctioning of the ULC, no orders are issued to carry out development works,” roared Fadnavis and Khopde.

The Minister, bombarded by both the BJP leaders, assured the House of immediate actions in this regard.

STAMP DUTY: Similarly, the duo raised the issue of stamp duty. They said, the Chief Minister had assured 0.5 per cent stamp duty to NIT in a meeting held on 14-12-2009 in Nagpur. The CM had agreed to pay Rs 50 crore to the NIT in the meeting. The issue was raised and debated for over half an hour on the starred question (79071). Fadnavis and Khopde said the State Government owes Rs 105 crore to NIT and demanded immediate payment of the same. The State Government is meting out the Second Capital city with double standards and treating it step brotherly. The cornered minister again assured the House that payment of Rs 105 crore would be made during the Winter Session of the Assembly in Nagpur.

LBT: Both the BJP leaders also raised the issue of LBT. The NMC has been put to loss of Rs 60 crore by the enforcement of the LBT. The massive loss is resulting in no salaries to employees and officials. The NMC General Body Meeting had passed a proposal that the Government should pay 1 per cent of Stamp Duty to NMC.

This demand was also agreed to by the Minister.