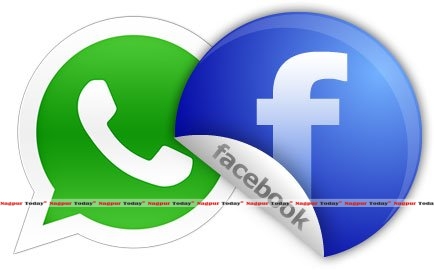 Facebook owner Mark Zuckerberg’s recent status update on his social networking site says he is “excited” about striking this deal. By ‘this deal’, Zuckerberg meant deal to buy out WhatsApp for enhancing its users’ experience. Nagpur Today delves deeper into this prospect.

To start with, Facebook has been riding high on success waves but it’s time for innovation, feels the technology experts who wanted the social networking site to focus more on messaging part in order to enhance its revenue prospects. Those in the business are of the view that it’s high time creators of Facebook should roll on to tap mobile users through giving them some extra. And this could be possible if the social media network draws the popular mobile messaging application WhatsApp to its portfolio.

A rough estimate puts total GSM mobile subscribers in India to 70 crores while the number of people with smartphones is roughly 20% of that. Overall overall internet users are a little more than 20 crores. With the market flooding with cheaper smartphones and feature phones the overuse of applications like WhatsApp, Viber, Wechat and Hike is bound to phase out SMS.

These services have created a peer-to-peer group messaging culture, like closed loops, and compared with Facebook updates or Twitter’s 140-character tweets, these have a special appeal.

As far Facebook is concerned it can grow steady with its Facebook Messenger but WhatsApp could give it a big leap and unquestionable leadership by integrating two of the most popular apps — the social networking app and the SMS-substitute app — a joint operation.

With this combination, Facebook can surely make the customers discard use of SMS and plug in to the services which can offer them free and convenient messaging.

In addition to it, Facebook can also leverage its mobile ad technology to come up with a combo offer where it can target audiences based on both social networking and messaging.

WhatsApp is ideally suited to young people who increasingly prefer rapid-fire smartphone messaging to making calls or churning out email. Facebook has been eager to keep the devotion of young users who set trends and carry tech habits into the future.