A top executive of a company owned by Congress MP Naveen Jindal has filed an FIR against Sudhir Chaudhary, editor of Zee News and another top executive of Zee Business. Sources in Delhi Police’s crime branch said investigation of the case has been given to the Inter-State Cell (ISC). “The complaint of extortion against two top journalists of Zee News for not running the news on Coal blocks allocation was received from a representative of Jindal.

After examining the complaint, a case has been registered and we will now be calling both the parties,” said a senior police officer, requesting anonymity.

When asked about the extortion amount, the officer refused to quote the exact amount but said it is over R50 crore. “The complaint is supported by call records details and video recording at a hotel, where Jindal had called these two for a meeting. We are examining the evidence,” the officer added.

Police said the meeting had taken place at a five-star hotel in New Delhi and apart from the evidence provided by the complainant, they have also contacted hotel authorities for CCTV footage. “We cannot rely on the evidence given by the complainant. The allegation is that Chaudhary contacted them and claimed that he had strong evidence against Jindal’s company in connection with coal scam. He demanded money for not running the story,” the officer added.

However, Zee News later ran the story. Sudhir Chaudhary told Hindustan Times that he has no idea about any such complaint as no one from the crime branch has contacted him so far. “We had done a series on coal scam and Jindal’s company’s name was also mentioned. This is nothing but retaliation as they couldn’t stop the stories,” he said. “The allegations are false and fabricated and the intention is just to gag the media,” he added.

A spokesperson for Jindal Steel, however, said he is not aware of any such complaint. 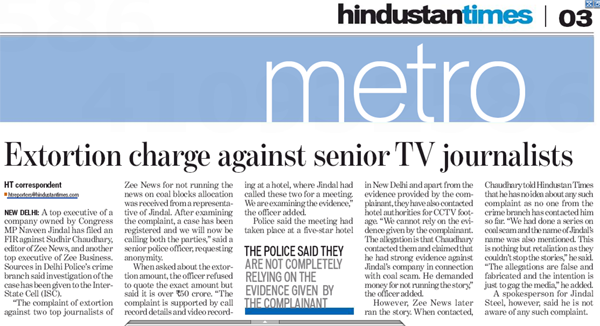