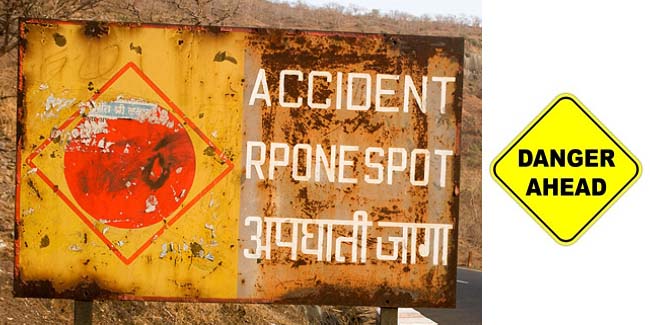 The RTI information received by social worker Abbhay Kolarkar says that 51,368 people were booked in drunk and drive case from 2010 to March 2013.

“These accidents spots were marked depending on the number of accidents took place near the spots in last ten years. We have checked the spots to find whether there is any problem of faulty roads or dividers but surprisingly, maximum number of spots has no problems on roads causing accidents. It’s learnt that maximum accident took place because of speeding vehicles and helmetless driving,” said More.

He claimed that among 122 people killed in accidents in last four months, few have lost their life due to their own mistake. “Either they drove at high speed and hit divider or hit other vehicles parked on the road,” said More.

Police said that spots like Narendra Nagar, Khapri Naka, Agrasen sqaure have no faults on the road but since its main road, people chose to drive at high speed especially in late night or early morning.

Cops informed that uneven roads mainly on the main roads like Narendra Nagar, Manewada square are responsible for the accident.

“Mostly vehicles skid due to these uneven roads causing mishaps. In many cases it seen that whenever the vehicle skid, there are high chances of suffering head injuries to the driver causing his death. Uneven roads are a major problem on many main roads of the city,” said a traffic cop.

More claimed that high cc bikes and sports bikes are also responsible for the mishaps of youths nowadays. “Their thrill for speed either claimed their lives or others,” he said.

Suggesting that helmet should be made compulsory for Nagpurians, More said that the accident figures are rising in the city as compared to other metro cities. He informed that people at Mumbai and Pune are using helmet due to which many lives are saved.

Police said that they have sent many applications to different departments under which the spot comes to reduce the accident numbers.

Chichbhavan over bridge, one of the accident spots marked, is narrow causing traffic problem. “Large number of commuters can’t travel at a time. It causes traffic jam and thus even traffic police can’t be present there to check the speed. We have sent an application for construction of parallel bridge for heavy vehicles. Similarly, we have sent many proposals where road repairing is urgent at the spots,” informed More.