One person was killed and four others were injured when the three-wheeler trolley they were travelling in was rammed by a Dinshaw Milk van on Saturday (February 22).

According to police, the complainant Purushottam Hrudayanand Pande (38), resident of Plot No. 59, Gajanan Society, Surendragadh in Nagpur was taking Rajkumar Tulshiram Deharia (38), his wife Bhawana, son Amal and Beby Raut, all residents of Surendragadh, in his three-wheeler trolley (MH-31/CB 1884 for purchasing vegetables. When they reached near the gate of Police Ground Shivaji Stadium on Katol Road at about 1150 hours, a Dinshaw Milk van (MH-31/DS 6001), driven rashly, rammed the trolley from behind and thus injuring Rajkumar seriously. Others received minor injuries. The driver of the van, after hitting the trolley, fled the spot along with his van. Rajkumar and four others were rushed to Mayo Hospital where doctors declared Rajkumar brought dead.

The Gittikhadan police, acting on the complaint of Purushottam Hrudayanand Pande, booked the driver of Dinshaw Milk van under Sections 279, 304(A) of the IPC and Sub-Sections 134, 177 of Motor Vehicles Act. PSI Bhaskar is investigating the matter further and is searching for the Dinshaw Milk van driver. 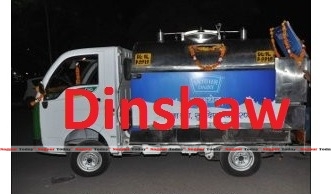