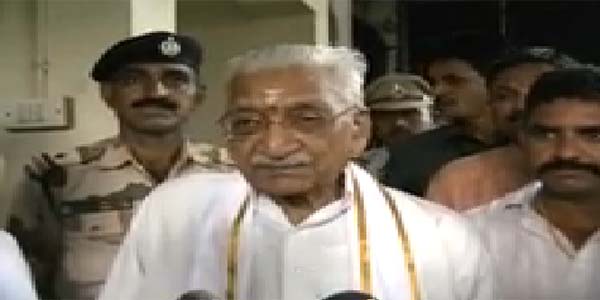 Ashok Singhal arrived at Nagpur airport en route to Amravati for attending a 7-day RSS camp to be held at Vyankatesh Lawns on Badnera Road in Amravati. The camp would be attended by key leaders of RSS, VHP and other associated organizations.

The VHP leader, briefly talked with media at the airport. When a scribe asked for his comments over Congress leader Digvijay Singh’s statement that the RSS provides training of bomb making in its camps to RSS Swayamsevaks, Singhal said, “Digvijay Singh has been frustrated over the fact that Congress would certainly be thrown out of power by the voters in the next Lok Sabha elections. And out of that frustration he gives baseless and meaningless statements after statements. In fact, Digvijay Singh has lost mental balance and has gone insane. Therefore, no intellectual person gives any weight to his absurd statements. My advice to him is that he should think twice before giving any baseless statement in future,” Singhal stated.