Bollywood parents Dharmendra and Hema Malini are all set to the grace the marriage ceremony of their younger daughter Ahana Deol on Sunday. Ahana Deol, who got engaged to her businessman beau Vaibhav Vohra last year, tied the nuptial knot on Sunday morning and the reception will be held at ITC Maratha in the evening. There will also be a function in Delhi. 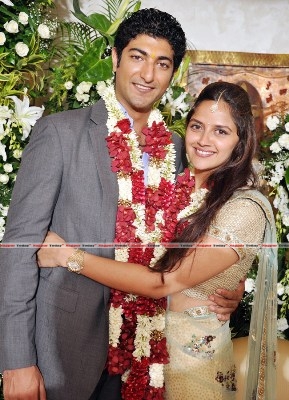 The mehendi ceremony was held at Hema’s Juhu bungalow in Mumbai on Friday followed by a grand sangeet function at ITC Maratha on Saturday. The mehendi function was a close affair and only relatives and friends were invited for the ceremony. The mother and sisters trio was dressed in Neeta Lulla’s designs.

At the sangeet ceremony, Ahana wore a blue lehenga with riot of floral designs. His elder sister Esha Deol, who was dressed in a silver-orange lehenga by Shyamal & Bhumika, staged a special performance for her younger sister on ‘Dhoom Machale’ song.

This is the last marriage of the Deol family and Hema and Dharmendra are leaving no stone unturned to make it memorable and a big one. But, both her brothers Sunny and Bobby have decided to give the marriage a miss as they don’t want to do anything which might hurt their first family. Both Sunny and Bobby are Dharmendra’s sons from his first wife Prakash.

During Esha Deol’s wedding in 2012, Sunny and Bobby were missing from all the events related to the wedding. But Ahana Deol’s cousin Abhay Deol will be full attendance.