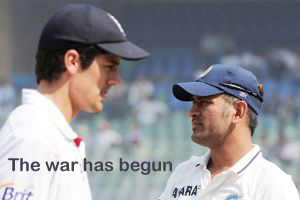 A good recovery from England after the two early wickets in the morning session. Pietersen adopted a positive approach for 28 from 75 balls, while Trott made exactly the same score from 83 balls with the duo hitting four boundaries each during their unbroken 45-run stand from 22.3 overs.

India were ultra-defensive in the morning session with a well spread out field and not many close-in fielders.

Ishant was the best bowler for India as he took two for nine in eight overs with the variable bounce aiding him a great deal.

Ojha opened the bowling to give away 14 runs in 10 overs and surprise pick Ravindra Jadeja hardly made an impact with the ball for eight lacklustre overs for 19 runs.

Piyush Chawla also failed to do anything at all during his five-over spell for 14 runs, while R Ashwin bowled just two overs.

The pitch is totally dry and full of cracks and already doing things on the first day. England would be looking to survive the day and get a score of around 300 in the first innings. It would be nearly impossible to bat in the fourth innings on this wicket as the match progresses and the cracks widen.